The OnePlus Nord is here in India and its price starts from Rs 24,999. So how good is it this more affordable OnePlus phone? In this OnePlus Nord quick review, we find out. From being an outsider just a few years ago to becoming one of the biggest phone makers in the country, OnePlus has seen a meteoric rise in its journey. Through the years, it has written many new chapters with its products, and now the company has started an all-new one with its mid-range offering, the OnePlus Nord.

In a way, it is a second take by the company on creating a more affordable phone. The first was OnePlus X, which OnePlus later said was a mistake. But it seems lessons have been learned well because the OnePlus Nord, the second take, is right up there with the company's more expensive phones in terms of what it brings to users. It brings a lot.

The OnePlus Nord has been launched in India at a starting price of Rs 24,999 for the 6GB+64GB RAM and variant and goes up to Rs 29,999 for the top-end 12GB RAM and 256GB storage one. At the price, it is not only the most affordable OnePlus smartphone in the country right now, but more importantly, is an attempt by the company to reclaim a segment of the market that it had slowly vacated over the last few years because of the gradual rise in prices of its smartphones.

As a new product line, Nord uses the same formula that has made past OnePlus smartphones such a big hit with buyers in the country. In essence, the OnePlus Nord promises all the same things that the more expensive OnePlus flagships offer. We have the same flagship-like performance, and refined software experience paired to an attractive design -- albeit now being provided at a much more affordable price than we have seen in the recent past.

Despite being an "affordable" mid-range phone, the OnePlus Nord looks and feels very much like it belongs to the premium category of devices. And, much of it is to do with the fact that it builds on the core burden-less design philosophy that OnePlus introduced with the uber-premium OnePlus 8 series of phones.

As such, from the moment you first lay eyes on the OnePlus Nord, to the moment you hold it, the phone successfully manages to establish itself as a far more premium device than it actually is. While there is no curved display, or a fancy frosted glass back panel to give the phone an edge over the competition, the OnePlus Nord still manages to maintain a rather premium profile with the use of glass both at the front and back of the phone.

The basic design elements, including the finish of the back panel, the vertically placed camera set-up, the placement of the OnePlus logos, and the general attention to detail -- for example with the quality of the material used on the alert slider -- all help to make the Nord feel like an extension of the premium OnePlus phone line-up of phones, and not just a new line-up under the OnePlus brand name. Another thing to note about the OnePlus Nord's design is just how lightweight it is. At 184g, it feels easy in the palm, and with its curves at the back, is also quite comfortable to grip in the hand.

The display on the phone is a 6.44-inch AMOLED panel running at a refresh rate of 90Hz. It is rated to provide 408ppi pixel density and 20:9 aspect ratio. For protection, the display is covered by a sheet of Corning Gorilla Glass 5. In our limited interactions with the device till now, we found this panel to be quite a delight to use. It gets plenty bright and generally outputs vibrant and punchy colours. Text looks crisp on it, and overall, the phone's panel feels quite good for a mid-range phone.

The panel also houses a dual punch-hole, which actually feels like a nice design element at the front, and also hides beneath the surface an in-display fingerprint scanner. The latter is quite responsive and fast. 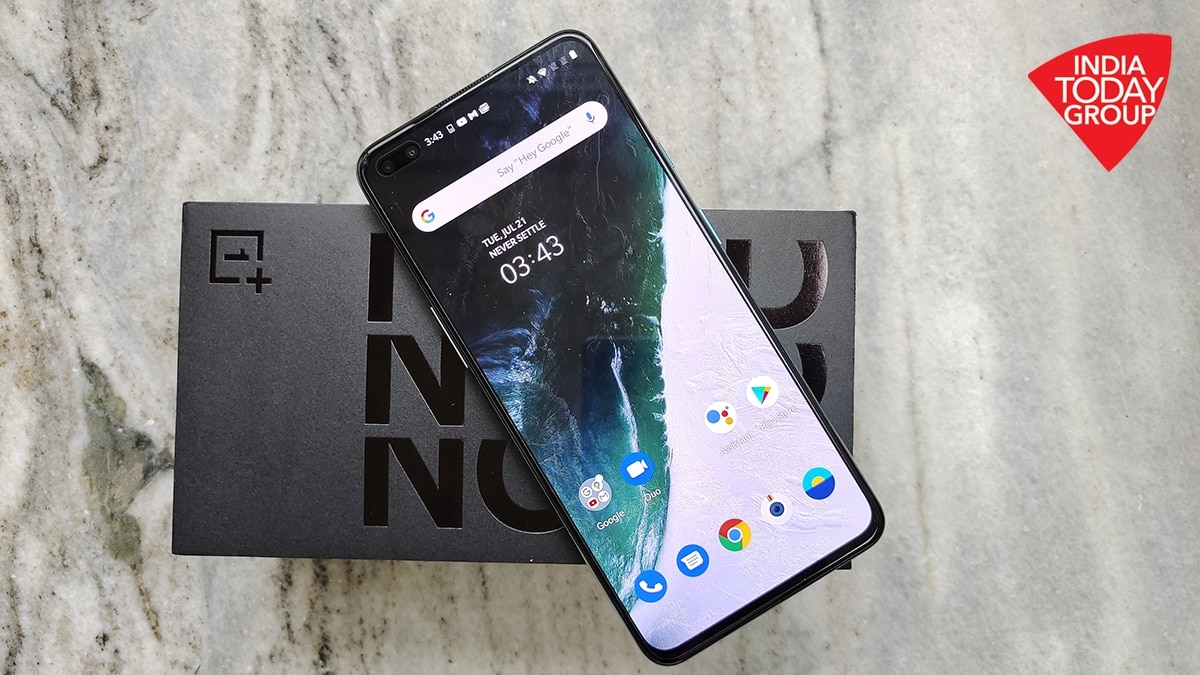 OnePlus Nord: What's under the hood?

Beneath the surface, there's a rather powerful mid-range chipset in the Snapdragon 756G which has been paired with up to 12GB of RAM and 256GB of UFS 2.1 storage. This hardware is tasked to run a clean copy of the OxygenOS 10 operating system based on Android 10.

On the spec sheet, this is the most noticeable of differences between the flagship OnePlus 8 series devices and the Nord, however, once you get to start using the phone, you realise the Snapdragon 765G chipset does quite a good job at bringing flagship-grade performance to users. On paper, there may seem a lot of difference between the Snapdragon 865 and Snapdragon 765G, while using the device I found the Nord to be snappy and responsive.

Keeping the lights on the device is a 4115 mAh rechargeable battery with support for fast 30-watt recharge via the USB Type-C port. This pack generally lasts a day on a single charge and can be topped up just as fast using the Warp charger that the company is bundling with the device.

The Nord also comes with a dual selfie camera setup. In addition to a 32-megapixel Sony IMX616 sensor main shooter, the OnePlus Nord has an 8-megapixel ultra-wide angle lens for a wider field of view while clicking selfies. 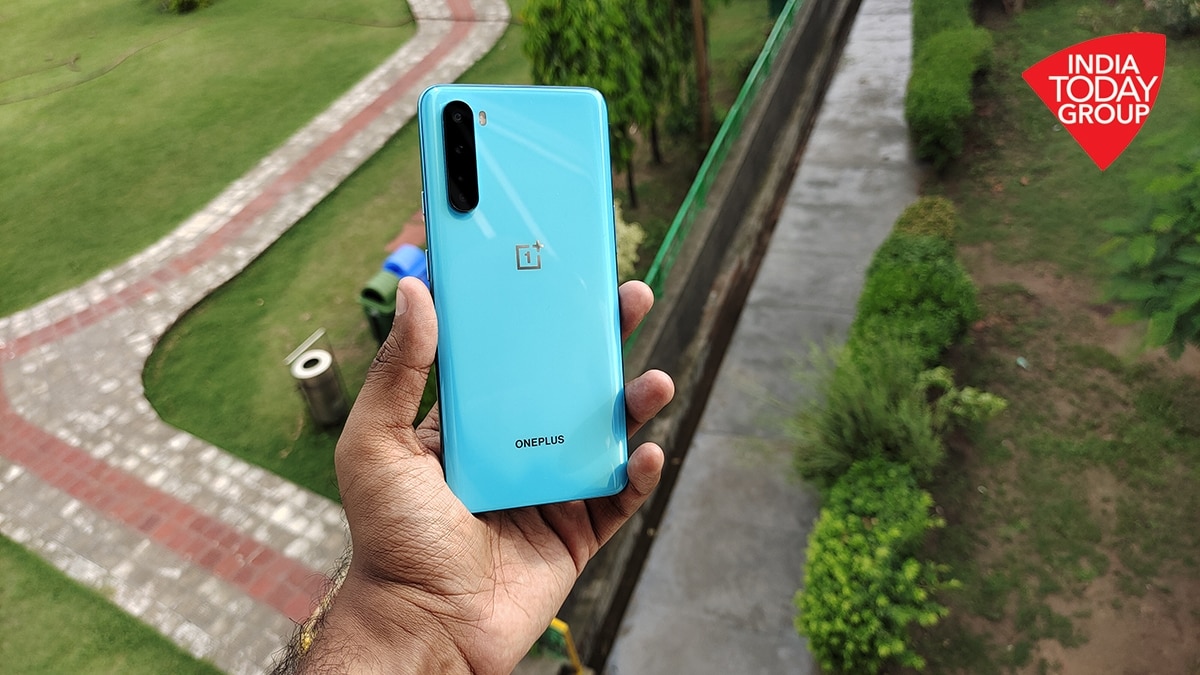 Both the front and rear camera set-ups bring access to a number of features with them, including the Nightscape mode that we have seen in the OnePlus 8 series phones. While it's too early to give a definitive verdict on the cameras, our initial impressions of the cameras have been quite positive.

This also holds true for the phone, which at a starting price of Rs 24,999 appears to be quite an impressive deal because of the sum of its premium design, and powerful internals. Although to get the most affordable version of the OnePlus Nord that has 6GB RAM and 64GB storage, you will have to wait until September. There is a lot more we need to say about the Nord, but before we say it with conviction and in all assurance we need to spend some more time with the device. For the full review, complete with OnePlus Nord camera image samples, stay tuned.