The OnePlus Nord and the Realme X3 cost Rs 24,999 but that is where the similarities end. The two phones not only have different hardware but also different ideas of what they want to give to consumers. 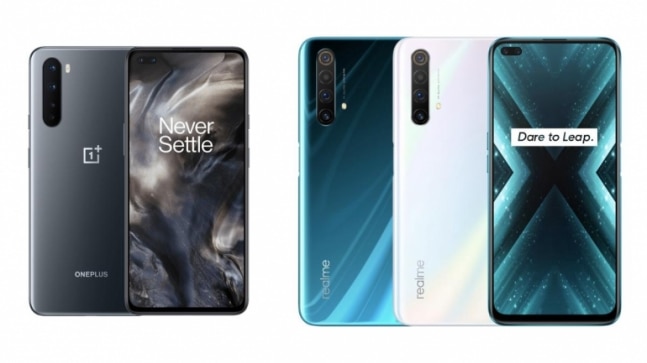 Before I set out to do the comparison, I want to make my preference clear: Of the two phones, with Rs 24,999 to spend, I will buy the Realme X3. And I will do so primarily because I find the Snapdragon 855+ processor in the Realme X3 a better proposition than the Qualcomm Snapdragon 765G in the OnePlus Nord.

This doesn't mean that the OnePlus Nord is a slow phone. Over here at India Today Tech, we reviewed the phone and found it to be a fast phone. There is something about the OnePlus phones. They are fast phones and the Nord doesn't do anything to upset the dictum. It's just that the Snapdragon 855+ belongs to the flagship-class processor. Though it was launched last year, it is a beefier and speedier processor, particularly for all of you who like to play Fortnite and Call of Duty on your phones. Like I do.

The OnePlus Nord does have one advantage, though. It has support for 5G baked into it, via the Snapdragon 765G. But right I will take extra performance over 5G, given that in India currently, we don't have any 5G network. Though if you plan to keep your phone for 2 or 3 years and are looking to get on to the 5G bandwagon as soon as you can, the Nord could be your choice between these two.

The personal stuff aside, let's take a closer look at these two phones.

The OnePlus Nord has a 90Hz Fluid AMOLED display while the Realme X3 has a 120Hz LCD display. The number favours the Realme X3. The reality, though, is that you will not notice much difference between a 90Hz display and a 120Hz display in regular use, though, in games that support extremely high refresh rates, you are likely to find the action smoother on the Realme. Now, before we declare a winner something else to note here: OnePlus Nord has an AMOLED display, which is bound to show punchier colours and more contrast, compared to the LCD screen of the X3. For watching videos and stuff, you will find the Nord better, though it does have a marginally smaller screen at 6.44-inch compared to the 6.57-inch display in the X3.

What about the cameras? Both Realme X3 and the OnePlus Nord have a decent set of cameras. The 48-megapixel OnePlus Nord camera clicks fairly good photos and so does the 64-megapixel primary camera in the Realme X3. Don't go by the megapixel counts. That doesn't matter as much as many will like you to believe. But the Realme X3 does have one advantage. With the X3 you get a regular camera, an ultra-wide-angle lens camera and a zoom lens camera. With the Nord, you get the ultra-wide lens camera and the regular camera, paired with a macro lens. The camera with a macro lens in both the X3 and the Nord is not particularly useful. But the zoom camera in the X3 is something that the users will find useful and appreciate.

What are other differences? The design is obviously different. The OnePlus Nord is clearly a looker and its design feels and looks better than that of the Realme X3. The subtle finish at the rear panel of the OnePlus Nord makes Realme X3 design a little boring. Although there is an iridescent pattern at the rear panel of Realme X3, that is not enough to add to its oomph. Design is something subjective, though. Some may like the matte finish on a Rs 25,000 phone while some will want their phone to be as shiny as it can be.

Software too is different. While the software of the Realme X3 and the OnePlus Nord Oxygen OS based on Android 10 is clean, slick and good to use, the Realme phone has a number of third-party apps installed on it. This is an annoyance, though not all users will be annoyed with it. Then there is the matter of updates. The Nord, according to OnePlus, will get updates for Android OS updates for 2 years. For the Realme X3, this is an unknown commodity at the moment.

Both OnePlus Nord and Realme X3 support 30W fast charging but there is a very little difference between their battery. The former has a 4115mAh battery while the latter sports a 4200mAh battery. Not that there will be a huge difference in the actual battery life with such a small gap, but there will definitely be some difference.

So, which one should you buy for Rs 24,999? For the overall premium quotient and good performance, my choice will be the OnePlus Nord. It is a better phone for most people. For gamers, though, I believe the Realme X3 is a better option.