The OnePlus Wireless Charger has just leaked online, complete with its photos. The cases, as well as a screen protector for the OnePlus 8 series, has also been revealed by tipster Evan Blass. 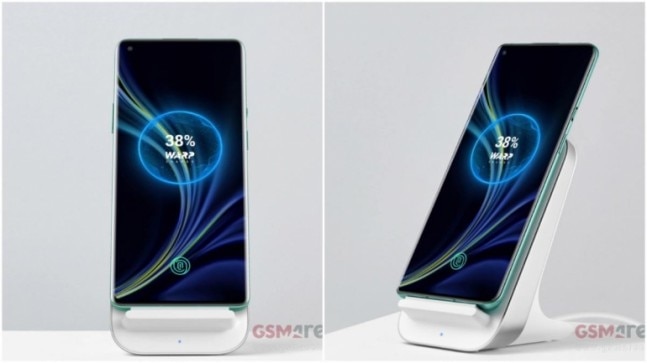 The Warp Charge 30 wireless charger looks quite similar to the Google Pixel Stand wireless charger. The phone will rest vertically, with a chin holding the phone. The charger gets a minimalist design that we are accustomed to on OnePlus devices. That said, the leaked photo reveals an air vent that most possibly houses a big fan, as the previous leak suggested.

OnePlus has gone deep into the technicalities, explaining how it has managed to bring the fast charging speeds from its 30W Warp Charge system on to a wireless charging system. OnePlus developed an isolated charge pump with Warp wireless direct charging architecture. It sounds too complex to understand but for most of us, what's important is that this charger will be able to fill up the battery to 50 per cent in 30 minutes.

OnePlus didn't mention the battery capacity yet and neither the supported phones. Come on OnePlus, just give us details on the phone.

The charger is said to pack some complex technology. The charge pump is rated at 97 per cent charge efficiency and it can kill charging as soon as it detects fluctuation in voltage or current. OnePlus also says the heat levels are kept lower despite the fast charging speeds.

The Warp wireless direct charging architecture (quite a mouthful) basically involves a customised chip that controls the amount of current and voltage to extract maximum efficiency. OnePlus says this chip should ensure faster charging for longer durations

To make it compatible with other devices, OnePlus says the charger supports Qi-standard wireless charging and it will deliver at speeds of up to 5W, good enough for your iPhones and Samsung phones. OnePlus also cheekily hints at support for 10W wireless charging on one of the upcoming phones.

The tip from Evan Blass also shows the official screen protector for the OnePlus 8 series as well as the transparent clear case.

Based on the tip and the announcement from OnePlus, it seems that there's a lot that's going to be announced on April 14 from OnePlus.