The Oppo A12 is a budget smartphone that has only been launched in Indonesia. 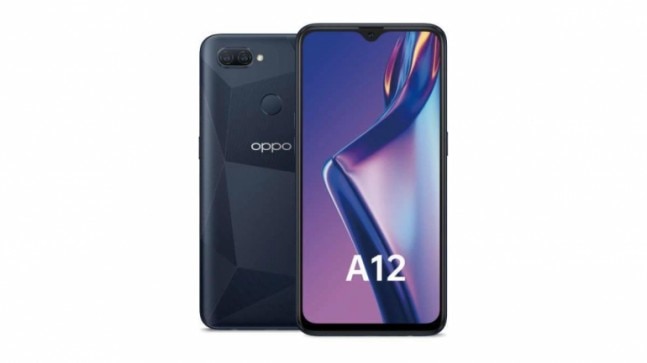 Oppo has launched the A12 as the new entrant to its A-series after a slew of leaks and rumours. The Oppo A12 is a budget smartphone that has been launched in the Indonesian market for now. The highlights of the smartphone include dual rear camera setup, a MediaTek Helio P35 SoC, and a fingerprint sensor at the back. The A12 comes at a time when Oppo is busy launching other smartphones in the A-series, as well as the Find X2 series, which was introduced back in March with the Find X2 Pro and the Find X2.

The Oppo A12 has been priced at IDR 2,499,000, which translates to roughly Rs 12,400 for the lonesome 4GB/64GB model. The smartphone comes in blue and black colour options. However, the international availability of the Oppo A12 is not currently known.

The Oppo A12 is a dual-SIM smartphone that runs on Android 9 Pie-based ColorOS 6.1.2. The smartphone houses a 6.22-inch HD+ LCD display with a resolution of 720x1520 pixels and an aspect ratio of 19:9. The display has a waterdrop-style notch at the top and is protected by a Corning Gorilla Glass 3. The display also has Blue Light Shield for protection against the blue light of the screen. Powering the Oppo A12 is an octa-core 2.3GHz MediaTek Helio P35 processor paired with 4GB of RAM and 64GB of internal storage. The storage on the Oppo A12 is expandable via a microSD card by up to 256GB. The Oppo A12 has a 3D Diamond Blaze design, which we have seen previously on other A-series smartphones. It has a thickness of 8.3mm and weighs 165 grams.

In the camera department, the Oppo A12 has two rear cameras - a 13-megapixel primary f/2.2 sensor and a 2-megapixel secondary sensor. The cameras support 6x digital zoom and other features such as professional mode, panorama, portrait, time-lapse photography, AR stickers. For selfies, there is a 5-megapixel f/2.4 sensor on the front, residing in the notch on the display. Both the front and rear cameras are capable of recording 1080p videos. There are Bluetooth v5.0, Wi-Fi, GPS, A-GPS, Beidou, GALILEO, GLONASS, and Micro USB 2.0 on the Oppo A12. The smartphone is backed by a 4230mAh battery under the hood. The Oppo A12 has face unlock feature, in addition to the capacitive fingerprint sensor at the back.