The Oppo A54 has been launched in Indonesia. It features a 6.51-inch display, Helio P35 SoC, 13 megapixel triple rear cameras and a 5000mAh battery with support for 18W fast charging. 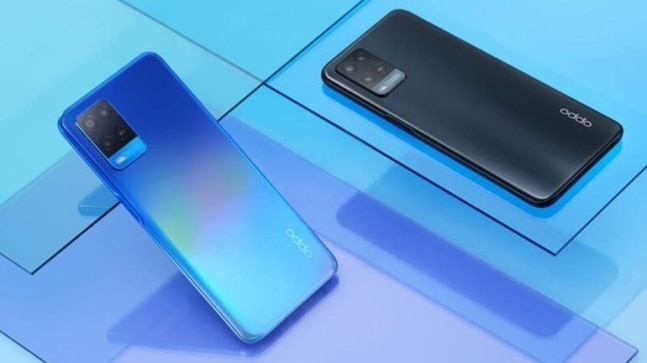 Oppo has released its latest mid-range device called Oppo A54 in Indonesia. The smartphone succeeds over the Oppo A53 that was launched back in August last year. It is powered by Mediatek's Helio P35 SoC, 13 megapixel triple rear cameras and a 5000mAh battery with support for 18W fast charging.

The phone is offered in Crystal Black and Starry Blue colour options. Currently, the device is only available in Indonesia, and there's no information so as to when the device will be made available globally or in India.

The Oppo A54 gets a square camera module on the rear with an Oppo branding. Whereas on the front, the smartphone features a punch-hole display at the top left corner of the screen.

As far as the specs of the Oppo A54 are concerned, the smartphone features a 6.5 inch HD+ IPS LCD with a standard refresh rate of 60Hz. The display has a resolution of 720x1,600 pixels and a pixel density of 296ppi.

The Oppo A54 is powered by Mediatek's Helio P35, which is an entry-level octa-core chipset clocked at 2.3GHz. This is coupled with 4GB of LPDDR4x and 128GB of onboard storage, which is expandable up to 256GB via micro-SD.

In the camera department, the Oppo A54 features a triple camera setup on the rear consisting of a 13-megapixel primary sensor, a 2-megapixel macro shooter and another 2-megapixel depth sensor for bokeh shots. Whereas on the front, the device gets a 16-megapixel shooter for selfies.

Moving forward, the Oppo A54 features a 5000mAh battery with support for 18W fast charging.

The smartphone has support for dual 4G VoLTE, WiFi, Bluetooth 5.0, Type C, and a 3.5mm jack in terms of connectivity. Apart from this, it gets a side-mounted fingerprint scanner for authentication.

Just a reminder, the Oppo A53 was powered by Qualcomm's Snapdragon 460 SoC, 13-megapixel triple rear camera setup and a 5000mAh battery with support for 18W fast charging.

iPhone 13 launch soon: Apple A15 chip, features, specs, release date, and what we know so far
OnePlus 9 Pro review in 5 points: Stellar cameras, fast in all it does but price goes up
Apple WWDC 2021 dates are out, may we finally see Apple's awaited AR glasses?

iPhone 13 launch could be impacted by chip shortage, Foxconn hit by supply issues