The Oppo A92 was also recently spotted on the IMDA certification website. 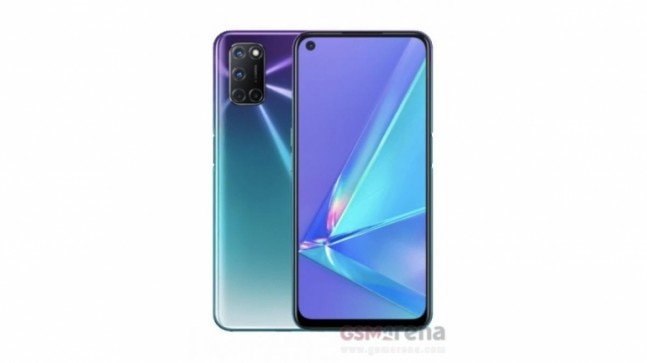 Oppo was recently busy with multiple smartphone launches, including that of the A92s. The Chinese company is meanwhile working on a set of new A-series smartphones, and a variant of A92s is among them. Dubbed Oppo A92, the smartphone has been in the rumour mill for quite some time. Now, the press renders of the A92 have leaked, hinting at a design that looks more similar to the A72 than the A92s.

The renders were shared by Evan Blass on the membership platform Patreon and obtained by GSMArena. The Oppo A92 can be seen housing a single punch-hole on the display and an L-shaped camera alignment at the back. The back has a glossy finish, along with rays emerging from the camera module and ending on the panel's boundary. The Oppo A92 can be seen in an Aurora Purple colour, but there could be more colour option. A previous render showed Oppo A92 with a lighter hue than the one Blass has leaked in photos.

Moreover, the Oppo A92 has a side-mounted fingerprint sensor on the power button. According to GSMArena, the Oppo A92 has similarities with the A72 and A92s, which is why it is safe to assume there will be an AMOLED display instead of an LCD one. Blass has leaked that the Oppo A92 will have a 6.5-inch display with a 1080p resolution. The smartphone will be powered by a Qualcomm Snapdragon 665 processor under the hood, paired with 8GB of RAM and 128GB of internal storage that can be expanded via microSD card. The same chipset powers the Oppo A72.

The Oppo A92 recently visited the IMDA certification website bearing the model number OPPO CPH2059. This hints at an imminent launch in Singapore but its availability in India and other markets is still unknown. The pricing information of the Oppo A92 is also something that is unknown for now. But if we are to guess, the Oppo A92 could cost around $225 (roughly Rs 17,000), as per the GSMArena report.