Oppo AirVOOC 40W wireless charger could launch soon: Here is how it looks

Oppo's upcoming Reno Ace 2 is scheduled to launch on April 13 where the AirVOOC charger will likely debut. 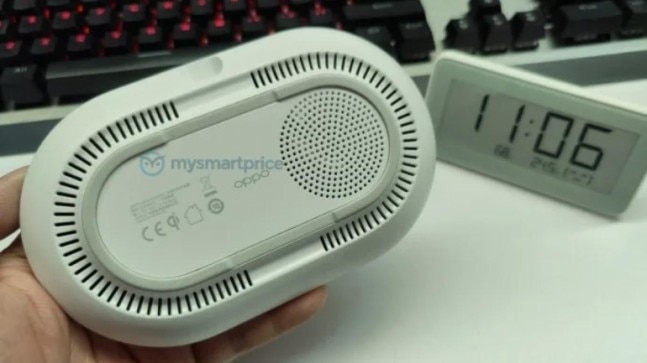 The Oppo AirVOOC wireless charger has been spotted on the WPC website, showing off a pill-shaped design with a silicone-covered platform bifurcated from the off-centre. The other bifurcated part houses a big button that could power on or off the charger. The bottom part of the wireless charger has a plethora of vents for air to pass. This possibly alludes to the presence of a fan inside the charger to handle the temperature for when the fast wireless charging heats the device up. The listing reveals that the AirVOOC charger has a "potential power level" of 10W.

Additionally, the first live image of the AirVOOC wireless charger has also surfaced, thanks to MySmartPrice. The charger looks exactly like its sketch in the WPC listing. But due to clarity, more details are visible in the live image. Oppo's AirVOOC charger will have some sort of silicone strap at the bottom circumference to avoid the corrosion. The maximum output rated on the charger is 65W, which could be possible via wired charging using the Super VOOC 2.0 charger that will be bundled in the Reno Ace 2's retail box. The maximum wireless power output is capped at 40W, as per the WPC listing and the information on the charger.

The Reno Ace 2 is said to come with support for wireless charging of up to 40W, in addition to a 6.5-inch FHD+ display, an in-display fingerprint sensor, and a Qualcomm Snapdragon 865 SoC. Some rumours have suggested that Oppo is expelling the smartphone from the Reno series and introducing Ace as a separate series. If this rejig materialises, Oppo will have Find series at the premium tier, Ace series at the sub-premium tier, Reno series at the upper mid-range and mid-range tiers, and A-series at the budget tier.

After Zomato, Swiggy starts grocery delivery service in some cities

OnePlus 8 launch on April 14: New products to be launched; check out colour, features, other details