There is going to be an announcement on September 14 where more details about the ColorOS 11 will be out. 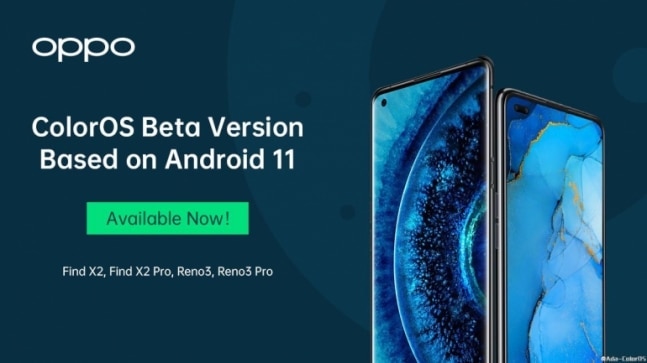 The Android 11 software is now available in the stable channel, meaning the OEMs that are a part of Project Treble are already rolling the new update to their smartphones. Oppo has announced its Reno and F-series smartphones are now receiving Android 11 through a beta upgrade of its proprietary skin ColorOS. It will be called ColorOS 11 but its stable and wider rollout details will be announced on September 14.

The ColorOS 11 is a big jump from the ColorOS 7.2 that is available on a slew of Oppo smartphones. Since it is Android 11, Oppo wants to keep things simple with the naming, which is why the next software for ColorOS is not called ColorOS 8. Oppo has said that it is rolling out in the beta channel for select users but the announcement regarding the stable release is scheduled to happen later this month.

The beta upgrade, as usual, has some issues that Oppo has mentioned on the forum. There could be random restarts of the phone, the dialer app might not detect the 'Clean Up' page, the camera is unstable to use, and finally, the Netflix service is not available. So it is advised that you install the update at your own peril.

The eligible smartphones for the ColorOS 11 upgrade are Reno 3, Reno 3 Pro, Find X2, and Find X2 Pro in India. You can visit the software update settings to apply for the beta version. Only after you are registered, you will receive the update if chosen to be one of the 2,000 participants.

While the first three smartphones are available for purchase to customers, the Find X2 Pro never went on sale. Instead, it was handed out to select people in a social campaign by Oppo dedicated to the frontline workers. Moreover, the Reno 3 and Reno 3 Pro were launched back in March, so it is a good thing they will get the Android 11 update in the first wave.

Android 11 will bring refined controls on your phone. It is not a major upgrade but a one that tries to simplify how Android looks on some phones. It is getting a lot easier to look at, besides taking care of productivity with new features. One such feature is the chat bubble that will work with any messaging app. It is a feature that has been available for Facebook Messenger for a long time. Google must have been impressed by it, which is it decided to make it a system-wide feature.

Oppo has not said anything about when the rest of the smartphones will get Android 11 right now but it might be something that is announced on September 14.