Oppo launched the F17 series last year and it is now ready for the launch of F19 series phones. 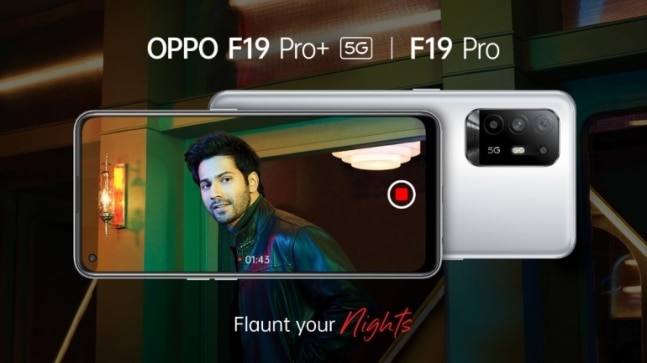 Oppo F19 Pro+ 5G and F19 Pro smartphones are set to launch in India on March 8. The launch date was revealed by Flipkart ahead of the official announcement expected from Oppo. Both Amazon and Flipkart have teased the new smartphones will be available on their platform as and when they are launched, but the latter also spilled the beans about the launch date. The Oppo F19 series will take things forward from the F17 line that was launched last year in India. In terms of how big an upgrade the F19 series will be, the top-end model F19 Pro+ will be a 5G phone, the first in the series. Also, there is no vanilla model this time, as in the successor of F17.

According to the Flipkart listing, the Oppo F19 Pro is scheduled to launch at 7 pm on March 8. Although the banner does not mention the F19 Pro+ 5G, it is likely to tag along. Oppo has roped in Bollywood actor Varun Dhawan as the new product ambassador, who will be showcasing the new F19 series phones. Oppo is also stressing the night photography skills of the upcoming phones, leveraging the AI Highlight Portrait Video technology that we previously saw on the Reno 5 Pro 5G. The feature optimises video portraits by automatically detecting and adjusting for light. When I tried the feature on Reno 5 Pro 5G, I found the feature good enough for shooting videos in dimly lit conditions.

Oppo has not said anything else about the specifications of the F19 series, but the rumour mill is at it. A report by Pricebaba has leaked nearly all the specifications of the F19 Pro and F19 Pro+ 5G, along with their renders, leaving very little to the imagination. The information comes courtesy of tipster Ishan Agarwal who collaborated with the publication. Let us talk about the design first. The Oppo F19 series will flaunt the punch-hole display design, a rectangular camera island, dual-LED flashes, a USB-C port at the bottom, and possibly the 3.5mm headphone jack. These design elements are likely to be common between both F19 Pro and the F19 Pro+ 5G.

Now, the specifications of the F19 Pro include a 6.43-inch Super AMOLED 1080p display, a MediaTek Helio P95 chipset, 8GB of RAM, 128GB and 256GB of internal storage options, four cameras at the back comprising 48MP main, 8MP ultrawide, 2MP portrait, and 2MP macro sensors, a 16MP selfie camera, and a 4300mAh battery with 30W VOOC Flash charging support. The Oppo F19 Pro is said to come preloaded with ColorOS 11.1 based on Android 11. And the colour options include black, silver, and purple.

The Oppo F19 Pro+ 5G, on the other hand, will have a few specifications bumped up. For 5G, there is going to be a MediaTek Dimensity 800U 5G chipset, which is available on the Narzo 30 Pro. There could be a single RAM and storage variant with 8GB and 256GB. Replacing the 30W charging will be 50W VOOC Flash charging on the Oppo F19 Pro+ 5G. And finally, the smartphone will come in black and silver colours.

This mix of specifications paints a good picture for the two phones, however, I am not sure how Oppo will fight off the opponents that seem to undercut the upcoming F19 series, such as the Realme Narzo 30 Pro.