The Oppo Find X2 will be unveiled on March 6 at an event in China. 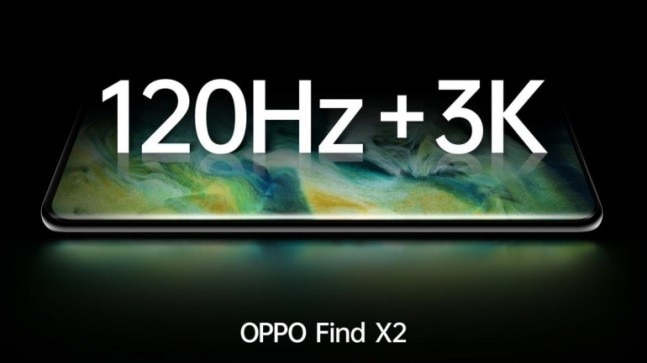 Oppo's March 6 event, which was confirmed earlier this week, will see the launch of the company's next flagship Find X2. The Oppo Find X2 was previously speculated to be launched at the MWC 2020 but it got cancelled over the Coronavirus fears. But Oppo has pushed back the launch of its flagship phone to next month. The Find X2 has been rumoured to come with some high-end specifications. A fresh teaser now confirms that the smartphone will sport a 3K display with a refresh rate of 120Hz, corroborating previous rumours.

Brian Shen, vice president and president of global marketing at Oppo, has shared one of the key details of the Oppo Find X2 in a tweet. He wrote: "The screen that a 2020 true flagship should have." It is accompanied by an image showing the first glimpse of the Find X2, wherein the display information has also been revealed. A horizontal pose of the Find X2 shows a display, which has a 3K resolution, with curved edges - much like what is seen on the prequel, the Find X.

Moreover, this display with support the 120Hz refresh rate, which has also been implemented by Samsung on the Galaxy S20 Ultra. Possibly, it is the same display, since Samsung is a supplier of smartphone displays for most companies. There seems to be a thick bezel around the display in the image. The smartphone also seems to have curved edges on all sides. Another teaser from Oppo shows a metal rim on the smartphone.

Going by the Find X2 listing that was spotted on a Vietnamese e-seller's website, the smartphone will come with a Qualcomm Snapdragon 865 SoC with 8GB of RAM and 256GB of internal storage. The display is reported to be 6.5-inch in size. The smartphone will have three rear cameras and a 32-megapixel sensor on the front for selfies. It is also purported to pack a 4065mAh battery that will support the 65W Super VOOC fast charging. The Oppo Find X2 will house a USB-C port and will run Android 10-based ColorOS 7 out of the box.

Besides, Oppo is also likely to introduce its first smartwatch, dubbed the Oppo Watch, that has been teased to pack a curved display with 3D glass. A previous teaser has also confirmed there will two physical buttons on the right side. But, the overall design of the Oppo Watch, as seen on the teasers, is very similar to Apple Watch's. The specifications and features of the Oppo Watch have, however, not been leaked yet and we might see get some information in the coming days.