Oppo has launched a new K-series phone that will be available in China for now. 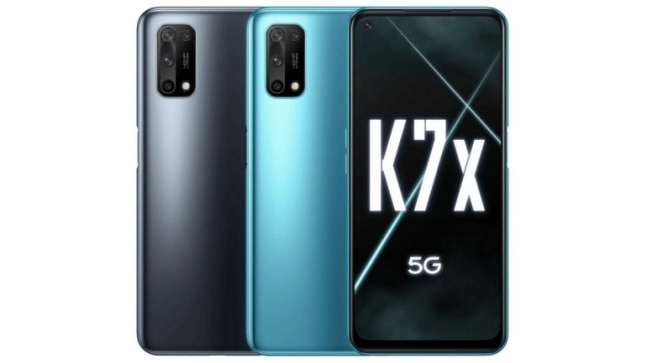 Oppo K7x has officially launched in China. The latest smartphone in the company's K-series brings a 90Hz screen on top of a polycarbonate body that packs the MediaTek Dimensity 720 processor inside. Because of the processor, the handset supports 5G connectivity in China, as well as other countries where the next-generation cellular technology is available. The Oppo K7x is more like the Realme X7 range that supports 5G for an affordable price tag.

The Oppo K7x costs CNY 1,499 in China, which translates to roughly Rs 16,700 in India. It will be available in Black Mirror and Blue Shadow colours starting November 11 across retailers in China. Oppo has not said anything about the global availability of the K7x yet.

The Oppo K7x supports dual-SIM cards with 5G networks on both slots. It runs Android 10-based ColorOS 7.2. The smartphone has a 6.5-inch 1080p LCD with a 90Hz refresh rate and a 90.5 per cent screen-to-body ratio. The pixel density is 405 PPI while the maximum brightness of the display is fixed at 600 nits. It also has a punch-hole which houses a 16MP selfie camera. At the back, there is a setup of four cameras that include a 48MP main sensor, an 8MP ultrawide sensor, a 2MP macro sensor, and a 2MP black-and-white sensor. There is an LED flash accompanying these sensors.

Powering the Oppo K7x is a MediaTek Dimensity 720 processor, as we mentioned, that is coupled with 6GB of RAM and 128GB of internal storage. You can expand the storage using a microSD card of up to 256GB. There is a fingerprint sensor mounted on the power button. For connectivity, you have 5G, Bluetooth, Wi-Fi, a 3.5mm headphone jack, and a USB-C port among other options. The smartphone is backed by a 5000mAh battery that charges at up to 30W. The smartphone also comes with a proximity sensor, a gyroscope, an ambient light sensor, and an acceleration sensor. The handset measures in at 162.2x75.1x9.1mm and weighs 194 grams.

Oppo is also equipping this device with its Hyper Boost 3.0 technology that will aid gaming while making sure the 5G speeds are high and the device's temperature is low. Oppo is also using the standard camera features for its cameras, including the UltraSteady and Ultra Night Mode.