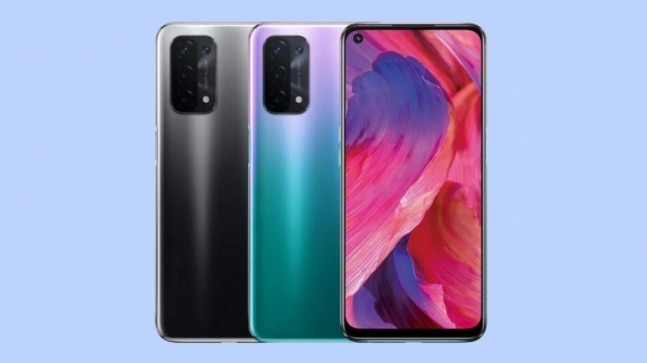 Oppo A54 5G launched in Europe

Oppo has launched its new midrange 5G device in Europe. This smartphone called the Oppo A54 5G succeeds over the Oppo A53 that launched back in August last year. It brings in Qualcomm's Snapdragon 480 SoC, 90Hz display and a 5000mAh battery.

As far as the design of the Oppo A54 5G is concerned, the smartphone looks quite similar to the Oppo A53, however, there's one change. The device gets a rectangular camera module on the rear, which holds the quad-camera setup and a flash. Besides this, the smartphone's back is pretty plain with Fantastic Purple and Fluid Black colour options. On the front, there's a hole-punch display. Finally, the device bears a side-mounted capacitive fingerprint scanner, unlike a rear one in the Oppo A53.

The Oppo A54 5G features a 6.5-inch FHD+ display with a 90Hz high refresh rate and 180Hz touch sampling rate. It is powered by Qualcomm's Snapdragon 480 SoC and clocked at 2GHz. This chipset is based on an 8nm manufacturing process and coupled with Adreno 619 GPU. For your information, Snapdragon 480 is the only 400 series chipset to bring support for 5G. This chipset is further coupled with 4GB of LPDDR4x RAM and 64GB of onboard storage.

In the camera department, the Oppo A54 5G features a quad camera setup on the rear consisting of a 48-megapixel primary shooter and 8-megapixel ultra-wide lens, a 2-megapixel macro sensor and another 2-megapixel monochrome lens. Whereas on the front, it gets a 16-megapixel shooter for selfies.

Connectivity options on Oppo A54 5G include WiFi, 5G, Bluetooth 5.1, GPS, NFC and a 3.5mm audio jack. The smartphone comes with all the necessary sensor that includes a geomagnetic sensor, proximity sensor, accelerometer, gravity sensor, and gyroscope.

The Oppo A54 5G ships with Android 11 with ColorOS 11.1 on top. Finally, the smartphone features a 5000mAh battery with support for 10W charging.

DoT gives go-ahead to telecom service providers for 5G trials in India
Realme laptop may arrive in India in Q3 2021, cost you less than Rs 50,000
Sony invests in Discord to bring it to PlayStation starting early 2022

Jio Postpaid plus plans starting at Rs 399 give free subscription to Netflix, check all offers