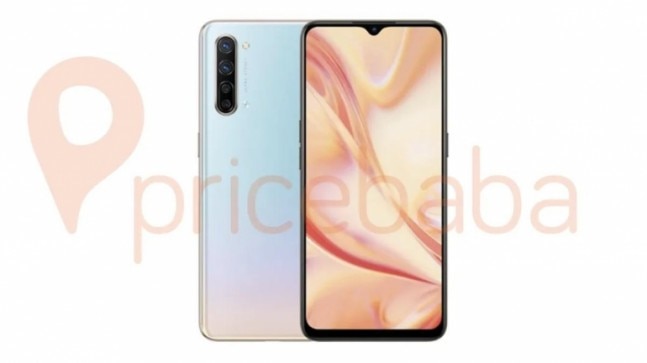 Oppo is preparing to launch two more variants to the Find X2 series. According to reports, Find X2 Lite and Find X2 Neo are in the pipeline for the global launch. While the Find X2 Neo is said to be the rebranded Reno 3 Pro 5G, the Find X2 Lite is tipped to the global version of the Reno 3 Youth, also known as Reno 3 Vitality Edition. A fresh render has leaked that claims to give the first glimpse of the upcoming phone, along with the specifications that could more or less be the same as those of the Reno 3 Vitality Edition.

According to Pricebaba and tipster Ishan Agarwal, which collaboratively managed to get its hands on the first render of the Find X2 Lite, the smartphone is expected to come with a waterdrop-style notch design on the display, unlike the Find X2 and Find X2 Pro smartphones that were launched recently with punch-hole design. There is a vertically-aligned quad-camera setup on the Find X2 Lite, as seen on the render. Next to the camera module is an engraving that says 'Ultra Steady', which is Oppo's proprietary feature for camera stabilisation. Rest of the design of the Find X2 Lite is also very similar to that of the Reno 3 Youth.

For specifications, the Reno 3 Youth has a 6.4-inch FHD+ Super AMOLED display and is powered by a Qualcomm Snapdragon 765 processor under the hood. It packs 8GB of RAM and 128GB of internal storage. The smartphone runs ColorOS 7.1 based on Android 10 on top. It is backed by a 4025mAh battery under the hood. In the cameras department, the Reno 3 Youth has a 48-megapixel primary sensor, an 8-megapixel secondary sensor, and a tertiary 2-megapixel sensor at the back while a 32-megapixel camera sits on the front. Since the Reno 3 Youth will purportedly be rebranded as Find X2 Lite in the global markets, the specifications are likely to the same.

The Oppo Reno 3 Youth was launched in China for a price of CNY 2,999, which translates to roughly Rs 32,000. While this could determine the pricing of the Find X2 Lite in global markets, some differences are expected. It is not confirmed whether Oppo Find X2 Lite will be launched in India. The same goes for the Oppo Find X2 Neo, which is also said to debut soon alongside.

PUBG MOBILE to now get a Library map, another new game mode with future update