Oppo Reno 4 could have a different design over the Reno 3 series but official information is yet to come. 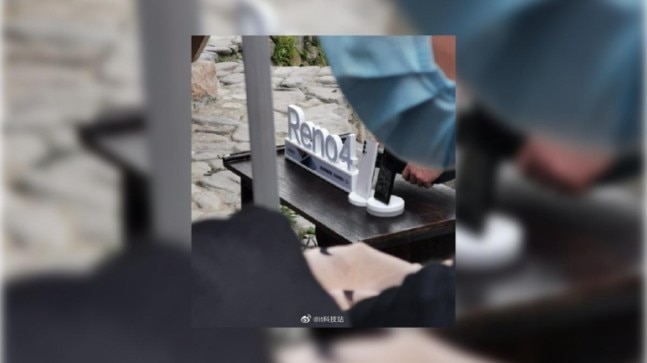 Oppo is allegedly working on the Reno 4 smartphones, which will succeed over the Reno 3 series. A live image has surfaced on the Chinese social media website Weibo that clearly shows what looks like the Reno 4 in two colour options. The image also has a cut-out of the Reno 4 moniker as well placed beside the two colour models. By the looks of it, the Oppo Reno 4 will be a major departure from its predecessor design-wise. There are four large camera circles aligned vertically, which looks like the camera setup on the LG Velvet. But there has been no revelation about the smartphone specifications.

The Oppo Reno 4 can be seen in black and white colours, along with a glossy finish at the rear panel suggesting the material used could be glass (or at least faux glass). The design of the smartphone also looks more refined than that of the Reno 3 smartphones. The patterns on the rear panel of Reno 3 seem to have been forgone with the upcoming series, suggesting Oppo might be looking to introduce some changes to its line-up. The entire Reno 3 series is as confusing as it is, which is why Oppo segregated the Reno Ace smartphone line-up into a standalone Ace series. Maybe, Oppo Reno 4 series will have fewer smartphones than its preceding series to allow for some decongestion.

The image leaked on Weibo also shows the Reno 4 series will support 5G networks, which is not surprising given the previous series has one too many smartphones with the same feature. For now, it is not clear whether 5G will be supported on the Reno 4 inside China only or if there will be global support. The camera information is also scarce right now, with the Weibo leak additionally claiming there will be improved low-light photography on the Reno 4. Moreover, the Reno 4 series could also have at least 30W fast charging support -- most Oppo phones have this capability while some top-end smartphones have at least the 65W fast charging technology.

Xiaomi Mi Box 4K or new smart TV? One of these is a clever choice