Oppo is launching the Reno 5 series in China on December 10 but it will bring it to global markets without 5G. 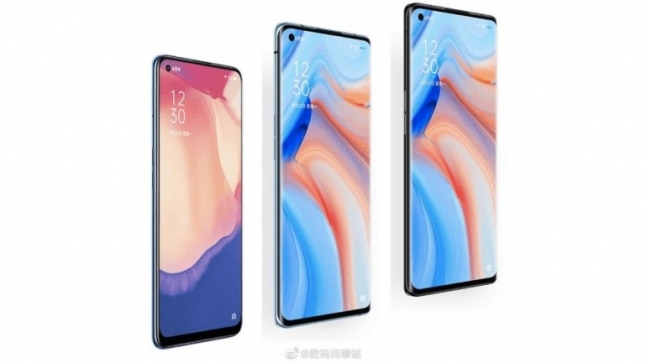 Oppo is launching the Reno 5 series in China on December 10. Much like last generation's Reno-series smartphones, the Reno 5 smartphones are expected to come with 4G variants. These 4G variants are usually for markets where 5G networks are not available, such as India where Oppo launched the LTE version of Reno 4 and Reno 4 Pro. Now, the Chinese company has confirmed it will introduce 4G variants for the Reno 5 series for global markets. The specifications of one of them, the Reno 5 4G, have also leaked.

The Oppo Reno 5 4G has been certified in several countries, including Thailand, Europe, and Indonesia. The Oppo Reno 5 4G has visited the certification websites of NBTC, EEC, and TKDN. This points out that the company is preparing to introduce the 4G variants of the Reno 5 series smartphones in several countries. Although there is no certification for India launch, Oppo might get the Reno 5 4G and Reno 5 Pro 4G smartphones certified on the Bureau of Indian Standards (BIS) website in the near future. Since the Reno 4 series has 4G variants in India, Reno 5 series will certainly have, as well.

The Oppo Reno 4 Pro performed pretty well, thanks to the Snapdragon 720G processor. There were a few gripes though, which I had when reviewing the phone. Some games did not run as expected, so on and so forth. This would mean that the Reno 5 could offer a similar experience, if not better. The Reno 5 Pro 4G specifications are still not available.

Moving on, the Reno 5 4G is also said to come bearing 8GB of RAM and 128GB of internal storage. Of course, there will be support for microSD card to expand the storage. The leak further suggests the Oppo Reno 5 4G will come with four cameras on the back, including a 64MP main sensor, an 8MP ultrawide sensor, and two 2MP sensors, one for macro photography and the other for depth sensing. The selfie camera on the Reno 5 4G is said to be a 44MP snapper, which is also what we have seen on previous Reno series phones. The smartphone is likely to come with the same set of camera features as the existing Reno-series smartphones come with.

The Oppo Reno 5 4G is also alleged to come with a 4310mAh battery under the hood. But there is going to be a significant upgrade in terms of fast charging. The Reno 4 4G comes with 30W fast charging but the Reno 5 4G could come with 50W fast charging, which will reduce the charging time drastically. The smartphone will sport a polycarbonate body and frame, although there will be the same gloss finish on the back.

Going by the specifications, the Oppo Reno 5 4G comes across as a renamed Realme 7 Pro, except for the 50W fast charging instead of 65W. Vietnamese tipster Chun has said the same thing on Twitter to find a relation between the two handsets. If that is the case, the selfie camera will be housed inside the punch-hole on the display. Anyhow, whatever the case may be, Oppo will officially announce it soon.

Meanwhile, the Oppo Reno 5 series is launching in China on December 10, but the pre-orders are already open for customers.