Oppo Reno 5 Pro+ has been scheduled to launch in China on December 24 but some details have emerged before that. 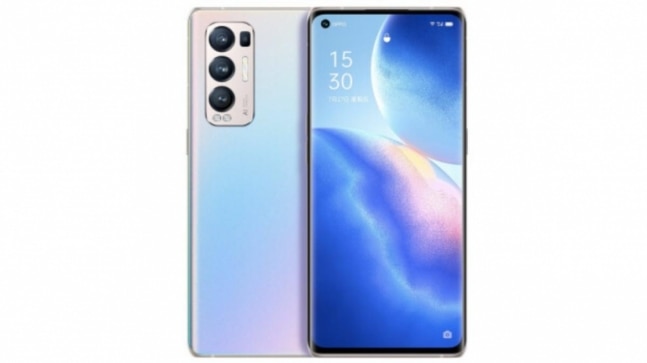 Oppo Reno 5 Pro+, the top-of-the-line model in the Reno 5 series, is launching in China on December 24. The company has confirmed some details about the Reno 5 Pro+ but not everything is officially known. Only the rumours have hinted at what this smartphone will come with. Now, ahead of the formal launch tomorrow, the Reno 5 Pro+ has been listed on an e-commerce website in China, revealing more specifications while reaffirming the design. A live hands-on video of the Reno 5 Pro+ has also leaked.

One of the leading e-commerce websites in China, JD.com has listed the Reno 5 Pro+ before tomorrow's launch. The listing announces that the pre-orders for Oppo's upcoming smartphone will start from December 24. The shipping details for the device are, however, not given on the website. This only means that we will have to wait for Oppo to divulge these things at the launch event for the Reno 5 Pro+ tomorrow. The JD.com listing also confirms that the Reno 5 Pro+ will come in two RAM and storage configurations. One is with 8GB RAM and 128GB storage while the other one has 12 gigs of RAM and 256GB of storage.

Interestingly, the listing on JD.com also suggests the Reno 5 Pro+ will cost CNY 9,999, but this seems like more of a placeholder. This is a quite high price and strays far from the range that the other two Reno 5 series smartphones are available in China for. Oppo launched the Reno 5 for a starting price of CNY 2,699 (roughly Rs 30,400) while the Reno 5 Pro starts at CNY 3,399, which is roughly Rs 38,300. If these prices are anything to go by, the Reno 5 Pro+ might just cross the 5,000-mark but will not cost too much. Anyway, we will know the whole picture at the tomorrow' launch of Reno 5 Pro+.

The hands-on video of the Reno 5 Pro+ shows the textured finish on the back of the phone, along with four cameras on the top housed inside the rectangular island. The smartphone has "Reno Glow" written on the side, much like how some other Reno-series smartphones have it. Sadly, the video does not show what the display and interface on the device look like.

Oppo has confirmed that the Reno 5 Pro+ will come with a Qualcomm Snapdragon 865 processor inside. This is an interesting choice because, after the launch, the Reno 5 Pro+ will be one of the flagships of this year until Xiaomi launches the M11 series later this month. The Xiaomi M11 is going to be the first smartphone powered by the Snapdragon 888 chipset that was announced earlier this month. Oppo is also one of the brands to have announced the phone powered by the Snapdragon 888 SoC but its phone is arriving early next year.

Other specifications of the Oppo Reno 5 Pro+ include a 6.55-inch AMOLED display with 90Hz refresh rate, a 50MP Sony IMX766 sensor that Oppo has developed in collaboration with Sony, a 13MP telephoto camera, a 16MP ultrawide camera, a 32MP selfie camera, and the 65W fast charging on the battery. These specifications are very similar to what the Reno 4 Pro brought but the processor is what will make the Reno 5 Pro+ stand out in the entire series.