Oppo has teased the launch of the Reno 5F but it is not going to happen in India initially. 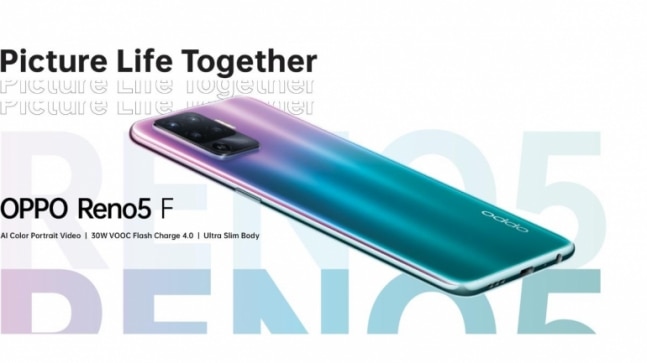 Oppo has teased a new member for its Reno 5 series. It is called the Reno 5F and can be seen having a very different design from what the rest of the family members look like. The phone has a four-camera setup on the back inside a rectangular plateau in an arrangement that we have seen on recent Vivo phones. Oppo is launching the Reno 5F in Kenya initially but it may bring this to other markets later, considering Oppo has done that before. The Oppo Reno 5F launch is set for March 22, according to the Oppo Kenya website that also teases some key specifications of the phone.

According to the website, the Oppo Reno 5F will have a tall screen with a punch-hole setup on the top left corner. There is a thick chin at the bottom, the power button on the right, and the volume rocker on the left-hand side. The camera design is going to be very different from what we have seen on Reno 5 series and it is a welcome change. There seem to be four cameras inside this module with a fifth cutout that says the cameras have AI technology. The LED flash is right next to this module on the right side. Towards the bottom is the Oppo branding while the colour of the phone seems like a mixture of pink, green, and blue. Oppo will have a name for this paint job. The website also shows the Reno 5F will have an "ultra-slim" body, although the thickness has not been specified yet.

The Oppo Reno 5F will have a USB-C port on the bottom flanked by a 3.5mm headphone jack and the speaker grille. Oppo is touting 30W VOOC Flash Charge 4.0 technology on the 4310mAh battery on the Reno 5F. This technology is claimed to top the battery up in under 50 minutes. There will be a Dual-View Video feature available, as well, which is nothing but watching the feed from front and rear cameras at the same time on the screen. This setup is useful on occasions when you want to feel you are engaging yourself more in a group, such as during birthday celebrations. There is AI Color Portrait Video, as well, which makes the entire background black-and-white except for the person in the video. While Oppo has not said what combination of cameras the Reno 5F uses on the back, a GSMArena report suggests the main camera is a 48MP shooter.

For now, this is everything that we know about the upcoming Oppo Reno 5F. It is also believed to be a trimmed-down version of the Reno 5 4G that was launched in select markets right after the Reno 5 5G series debuted in China last year.