The Oppo Watch could launch on March 6, the day when Oppo will also take the wraps off its next flagship phone. 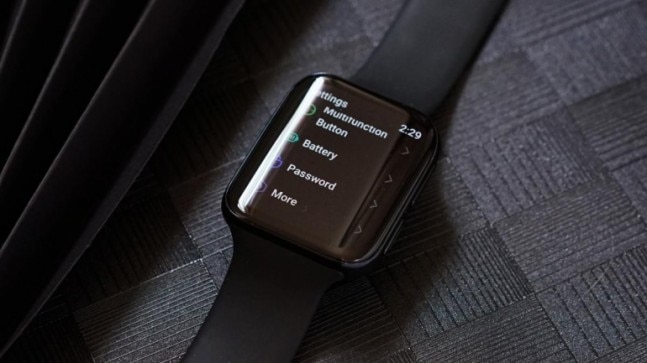 Oppo Watch has been teased multiple times, wherein its look and some key features have been confirmed. But none of these teasers tipped anything else, for example, the operating system. A new leak now shows what could be the first live image of the Oppo Watch running Wear OS. Contrary to the previous speculation that Oppo will preload the Oppo Watch with its custom OS, the smartwatch has been spotted running Google's software for wearables. Moreover, the Oppo Watch is also said to have a petite size and be priced aggressively.

According to the live image leaked by a tipster on Weibo, the Oppo Watch will indeed have a curved-edge 'flexible' display which is rectangular in shape - something that has been confirmed by Oppo's Brian Shen who is the vice president and president of global marketing. Also, the curved glass panel was leaked recently giving a closer look at what the Oppo Watch will pack on top. A previous teaser also revealed that there will be two physical buttons on the right side of the Oppo Watch. As per the teasers and leaks that have surfaced so far, the Oppo Watch looks nearly similar to the Apple Watch.

While the specifications and features of the Oppo Watch have not leaked in abundance, there is speculation that the smartwatch will support a sensor for measuring ECG. The implementation of an ECG measurement tool on a smartwatch will spike the prices, but the tipster believes Oppo will put an aggressive price tag on the Oppo Watch. Only a handful of smartwatches come with an ECG sensor, for example, the Apple Watch Series 4 or above and Samsung Galaxy Watch Active 2. Shen, who has been enthusiastically sharing details of the Oppo Watch one after another, too, has not revealed anything about the ECG sensor so far.

The Oppo Watch is likely to be launched alongside the flagship Find X2 on March 6. Oppo has now scheduled an event in China after its MWC 2020 plans got cancelled over the Coronavirus concerns. We are likely to receive more information about the Oppo Watch in the coming days.

Why Satya Nadella wants software developers to broaden their vision