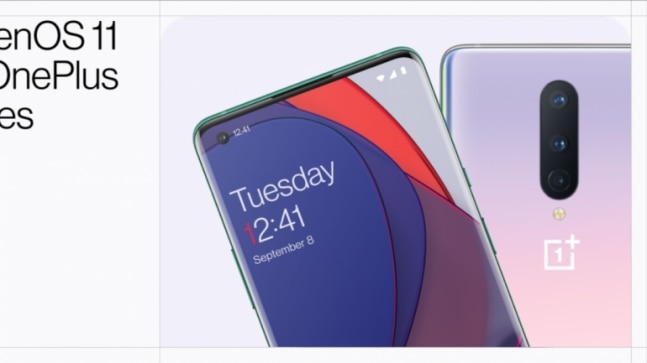 Given that the Oxygen OS 11 rollout is happening just days ahead of the October 14 launch of the OnePlus 8T, it is safe to assume that the new OnePlus phone will come with Android 11 out of the box, or the update for it will be available on the launch day itself.

The Oxygen OS 11 comes with a new UI, which has divided the OnePlus fans. While some call it an obvious evolution, some say that with the Oxygen OS 11, OnePlus is simply following the other phone makers.

As far as OnePlus is concerned, it highlights the following changes in the Oxygen OS 11.

-- New weather UI that supports switches between sunrise and sunset.

-- New gaming tools box, with easy access to toggle Fnatic mode. There are also three ways now for notifications in this mode: text-only, heads up and block

-- Quick reply feature through a small window in Instagram and WhatsApp.

-- New clock styles, including one created with the help of Parsons School of Design.

-- Shortcut for Dark Mode and automatic turn on and turn off for the feature.

-- Zen Mode now has 5 new themes, which are ocean, space and grassland and two more.

-- Zen Mode can be enabled in groups. This is more of a social setting.

Galaxy S20 FE sale starts in India, OnePlus 8T, Galaxy S20 and 3 other reasons why you should give it a pass