Payment app Paytm has been removed by Google from Play Store for allegedly violating its policies. 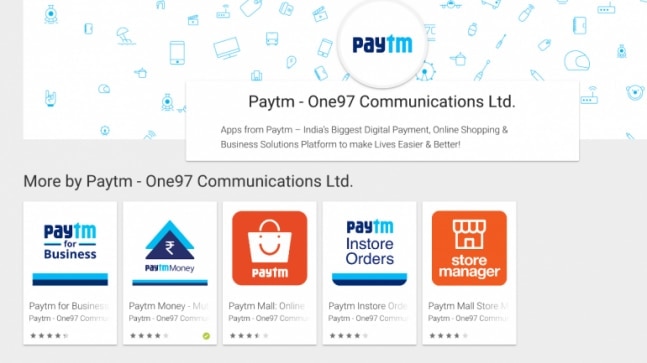 Payment app Paytm has mysteriously disappeared from Google Play Store. The app, owned by One97 Communications Ltd, is not visible on being searched on Google Play Store whereas all the other apps including Paytm For Business, Paytm Money, Paytm Mall, and others owned by the company are still available on Play Store.

However, Paytm is available for download on the Apple App Store.

Commenting on the removal from Play Store, Paytm in a statement on Twitter said, "Paytm Android app is temporarily unavailable on Google's Play Store for new downloads or updates. It will be back very soon. All your money is completely safe, and you can continue to enjoy your Paytm app as normal."

Google has apparently removed the Paytm app because it allegedly violates the company's rules around online gambling. A source within Google said that the Google team that worked with developers reached out to Paytm repeatedly to fix the issues with the app. However, Paytm made repeated violations of the Google policy, noted the source.

Paytm vanished from Google Play Store a few hours after Google's Suzanne Frey, who is Vice President, Product, Android Security and Privacy, detailed the guidelines in a blog post. "We have these policies to protect users from potential harm. When an app violates these policies, we notify the developer of the violation and remove the app from Google Play until the developer brings the app into compliance. And in the case where there are repeated policy violations, we may take more serious action which may include terminating Google Play Developer accounts. Our policies are applied and enforced on all developers consistently," she wrote.

"We have the same goals for our gambling policy. We don't allow online casinos or support any unregulated gambling apps that facilitate sports betting. This includes if an app leads consumers to an external website that allows them to participate in paid tournaments to win real money or cash prizes, it is a violation of our policies," wrote Suzanne.

What this means is that Google has apparently removed Paytm from the Play store because it believed the app was violating its guidelines on online gambling or contests.

Reports have claimed that Google had notified the developers of Paytm about the removal and it continues to be in touch with Paytm to get the app back on Play Store.

Paytm is owned by an Indian company called One97 Communications Ltd, which was founded by Vijay Shekhar Sharma but the company had received massive funding from fintech firm Ant Financials, which is an ally of China's Alibaba group.