Poco C3 has been teased by Flipkart as a budget segment device confirmed to feature a big display with a water-drop notch. 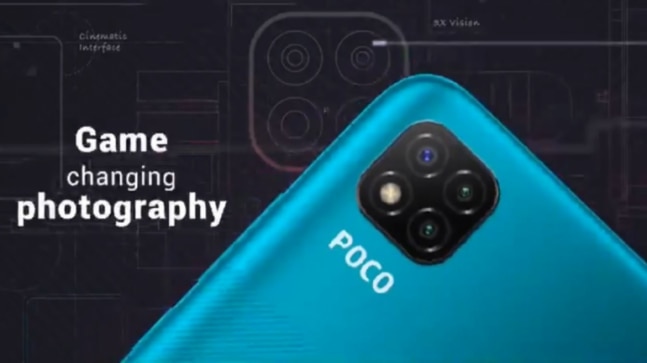 Poco's latest smartphone is set for launch in India later today. The company is going to launch the Poco C3 in India at 12pm as a reportedly rebadged version of the Redmi 9C already launched by its parent company in Malaysia earlier in the year.

The phone has previously been teased to Flipkart and is a budget segment device that has been confirmed to feature a big display with a water-drop notch and a massive 5000mAh battery.

The Poco C3 is scheduled for 12 pm launch in India, with the event scheduled to be live-streamed by the company via the company's Youtube channel and its other social media handles. There is little known about the price of the phone, but it is expected that the Poco C3 could be a budget segment device and retail for less than Rs 10,000 in India.

Talking about the phone, the device could very well be a rebrand of the Redmi 9C launched in Malaysia earlier in the year. As such, it could feature the same specs as the device. If that indeed turns out to be the case then we already have a good idea about what the device could look like and the hardware it could offer upon launch.

To remind our readers, the Redmi 9C was first launched as a budget smartphone powered by the Helio G35 processor. On the outside, the phone comes with a 6.53-inch HD+ display with a water-drop style notch and features a triple camera set-up with a 13-megapixel, 5-megapixel and 2-megapixel lens at the back. There's also a 5-megapixel selfie camera on the front. Running the show is a 5000mAh battery.

For now, there's little else that's known about the Poco C3, but with the phone set for launch later in the day, we'd not have to wait for long to know the details. If you're interested in the phone, follow India Today Tech for all the latest on the Poco C3's launch in India.