Under the hood, the Poco M2 comes with a MediaTek Helio G80 SoC paired to 6GB RAM and up to 128Gb of storage. 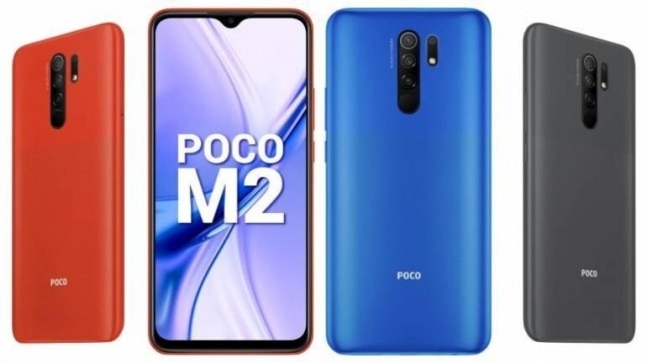 Barely a few days after it started teasing the Poco M2 in India, smartphone maker Pocophone has gone ahead and launched the Poco M2 in India. Announced as the company's latest bet for the budget segment of the market, the phone comes with aggressive specifications for the price.

The phone is essentially a watered-down version of the Poco M2 Pro that was earlier launched in India. Interestingly, the phone has also been launched a day after the company announced the Poco X3 NFC globally. In the run-up to the phone's launch, the Poco M2 had been teased quite a bit, but not all of its details had been shared online. At the launch, the company announced that the phone will be a Flipkart exclusive.

Display: The Poco M2 comes with a 6.53-inch display with support for Full HD resolution for watching movies and playing games.

Chipset: Under the hood, the phone hides a MediaTek Helio G80 SoC.

Front camera: On the front, you get an 8-megapixel shooter for selfies and video calls.

Battery: Th phone gets a 5000mAh battery with support for 18W fast charging.

The Poco M2 is one of the most powerful smartphones in the segment right now. Its biggest highlight is definitely the fact that it comes with a huge 6.53-inch display with support for Full HD+ resolution. There's also a big battery that can store up to 5000mAh worth of charge ad can be topped up easily with an 18W fast charger. The phone also impresses with its promise of a quad-camera set-up at the back.

Poco M2 Pro has been launched in two variants. Both offer 6GB of RAM, but differ in storage. The entry variant with 6GB RAM and 64GB storage will be made available for Rs 10,999. The higher-end variant will be available for Rs 12,499. The phone will also get Rs 750 instant discount through the phone's bank partners. It will start retail on September 15 via Flipkart.