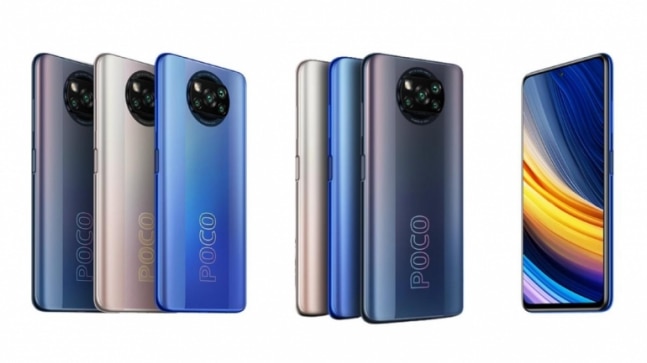 Xiaomi's sub-brand Poco has seen unprecedented success in its short period of existence. Poco launched its first smartphone Poco F1 back in 2018. Poco F1 was a midrange device that came with the flagship Snapdragon 845 SoC, a capable set of cameras and a 4000mAh battery. The smartphone was made available at a starting price of 20,999 in India.

The brand gained immense popularity through the launch of Poco F1. With this success, Xiaomi spun the Poco sub-brand off into its own company. Now the brand releases Phones under X, M and F lines.

We have already seen two midrange devices under the Poco X moniker, namely Poco X2 and Poco X3, in India. Now, the brand is gearing to launch the Poco X3 Pro, which is assumed to succeed over the Poco X3 that was launched back in September last year.

As per the reports, the Poco X3 Pro is expected to be an upper mid-range smartphone powered by Qualcomm's Snapdragon 860 SoC, a 120Hz FHD+ display and a 5200mAh battery. Also, the global launch of Poco X3 Pro is just around the corner, with the smartphone slated to go official on March 22. Keeping that in mind, we decided to stack up everything we know so far about the Poco X3 Pro ahead of the launch.

--The Poco X3 Pro is the next device in the brand's launch pipeline. As mentioned before, the smartphone is confirmed to launch globally on March 22 and in India on March 30. The Poco X3 Pro has seen a plethora of leaks ahead of the launch, helping us with this upcoming smartphone's ins and outs.

--Through some leaked renders, we know that the upcoming Poco X3 Po will ship in a design akin to the previously launched Poco X3. It will be made available in three colour options Phantom black, Metal Bronze Frost Blue.

--The Poco X3 Pro features a circular camera module with Poco branding on the rear in terms of design. Whereas on the front, it gets a punch-hole display that houses the selfie shooter. Apart from this, it gets a side-mounted fingerprint scanner for authentication.

--As far as the smartphone's specs are concerned, the Poco X3 is expected to feature a 6.67-inch FHD+ IPS LCD display with support for a 120Hz refresh rate.

--Moving further, the Poco X3 Pro may ship with Qualcomm's Snapdragon 860 SoC, which is yet to be announced. This will be a big leap in terms of performance as no Poco X series smartphone has shipped with an 800 series chipset. Moving further, we expect it to ship in two RAM and storage configurations, 6GB+128GB, 8GB+256GB, respectively.

--Smartphones from Poco have performed pretty well on the camera front. Keeping that in mind, we expect the Poco X3 Pro to get a decent camera upgrade.

--However, as per our information, the upcoming Poco X3 Pro may sport a 48-megapixel quad rear camera setup, out of which we do not have specs of the other three sensors. This seems to a downgrade from the 64-megapixel quad-camera setup on the Poco X3.

--The Poco X3 Pro is expected to ship with a 5200mAh battery with support for 33W fast charging.

--Finally, the Poco X3 Pro should ship with Android 11 with a Poco launcher on top. In terms of connectivity, the smartphone will have support for dual 4G VoLTE, Bluetooth 5.1, GPS, NFC, Type-C and more.

The Poco X3 Pro is soon making its way in India. The smartphone is slated to go official worldwide on March 22 and on March 30 in India.

Poco has a tendency of pricing it's smartphones aggressively. Therefore, it's easy to assume that the Poco X3 Pro will be priced affordably. Moreover, the prices have leaked online through a European retailer, through which we know the price of POCO X3 Pro. The prices of both variants are 6GB+128GB for EUR 269 (Rs 23,000 roughly) and 8GB+256GB for EUR 319 (Rs 27,600 roughly).