The latest Golden Pharaoh X-Suit is a culmination of the Egyptian-themed outfit and modern technology that costs many crates in the ancient mode. 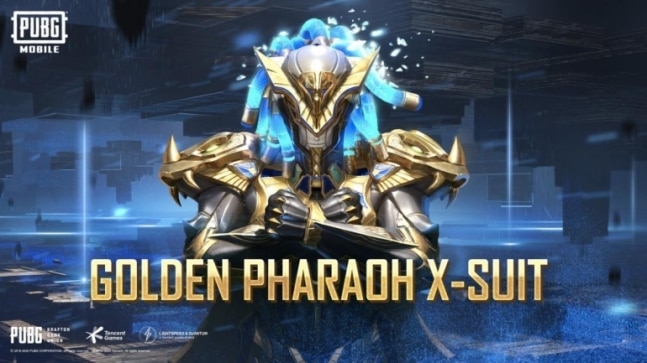 For so many years, PUBG Mobile has focussed on enhancing the gameplay by introducing new strategies, new maps, and, of course, the weaponry. It has paid only so much attention to what the player looks like in various outfits. PUBG Mobile is introducing its first upgradable outfit called the Golden Pharaoh X-Suit. It is a limited-time outfit that can be unlocked only for the ancient mode that is rolling out within the Erangel and Miramar maps. It is based on the ancient Egyptian ruler but with so many modern touches to it, such as the charcoal-coloured elements in the suit that have various functions.

The Golden Pharaoh X-Suit has three forms - basic, advanced, and final - which can be unlocked when exploring various crates within the ancient mode. The outfit is not cheap and will also need you to spend money on it for reaching the final form. The outfit comes with several emotes that are exclusive to it and will not be available on the rest of the outfits. The basic form needs specific tokens called Starfire Stone and Star Fragments from the crate. The final form has the golden wings, false hair and beard, shoulder pads with snake designs, and the chest armour. When a player wearing it dies, other players cannot pick it up.

There are also certain exclusive rewards that the Golden Pharaoh X-Suit brings to the table. These exclusive rewards can be accessed from the Pharaoh Crates, which is available until August 13. There are more Egyptian-themed Legendary and Epic items that can be won. Mind you, the outfit will be available only within the ancient mode and cannot be worn outside of it. These ancient modes are playable via floating temples in both Erangel and Miramar maps for a limited deal of time. There is also a new Team Gun Game mode in the ancient mode that can be accessed from the Arena for the two maps.

PUBG Mobile recently rolled out the Livik map, which is a 4x4 Nordic map that required about 15 minutes of gameplay to finish and collect most rewards. The Livik map is still in beta and will be enhanced over time unless the stable version is released. The map brings new weapons and vehicles, including the monster truck.

TikTok's comprehensive ban and not its sale is US govt's intention, says ByteDance CEO