Qualcomm Snapdragon Conquest Tournament 2020 has arrived in India with a prize pool of Rs 50,00,000. 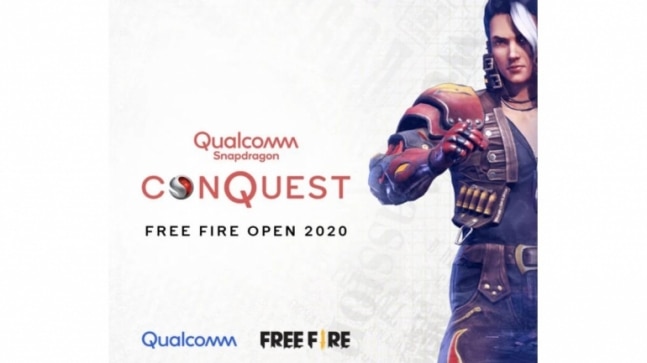 Qualcomm, the company that manufactures chipsets for a wide number of Android smartphones, is sinking its teeth into India's esports realm. The chipmaker has announced the Qualcomm Snapdragon Conquest Tournament, giving away a grand prize of Rs 50,00,000 (50 lakh) to a range of winners who will qualify various rounds. This tournament is for the Garena Free Fire battle royale game as Qualcomm looks to boost the esports industry of India ahead of the planned launch of PUBG Mobile India.

The Qualcomm Snapdragon Conquest Tournament dates are not available right now, but if you are interested registrations are now open. The best part is that these registrations are free of charge -- unlike some other tournaments, this one will not need you to pay up anything to get yourself enrolled. But there are certain eligibility criteria that you will need to meet. The most important one among those is that you need to be well-versed with the game, Garena Free Fire. Free Fire is similar to how PUBG Mobile works, which is re-entering India in a new form.

There will be several events that will take place under the tournament throughout the year. The Snapdragon Conquest Tournament will be fought between teams having four members each, progressing to subsequent rounds as they win against the opponent team. These matches will be live-streamed, according to Qualcomm, along with players having their individual streams where they can talk on a variety of topics, including their gaming strategy and gameplay.

Qualcomm has not said anything on the level of difficulty that these players will have to face. But going by how previous tournaments have been, the difficulty level will increase by each stage, making it difficult for teams to win. Eventually, only a few teams will make it to the penultimate and ultimate rounds that will get the winners a prize of up to Rs 50 lakh from Qualcomm.

The chipmaker is not revealing the tournament dates, but that should happen soon. Moreover, Qualcomm's entry to India's esports sector brings more opportunities for the gamers of India. The first tournament is in partnership with Garena Free Fire but Qualcomm is likely to bring more titles to its esports tournament in future. These could include the upcoming PUBG Mobile India that PUBG Corporation is launching in India with a series of censored elements, such as fully-clothed avatars.

Commenting at the launch of esports tournaments, Rajen Vagadia, Vice President, Qualcomm India Private Limited and President, Qualcomm India, SAARC, said, "India is a mobile-first industry. The phenomenal rise of mobile gaming in India is driving not just the demand for better devices in the industry but also the need for a richer ecosystem and more diverse opportunities for mobile gamers. The Snapdragon brand is known for delivering superior gaming experiences."

He further said, "Our work with the larger ecosystem of OEMs, game developers, and publishers, is helping us learn and provide an upgraded gaming experience across multiple price tiers. We are really excited about the launch of Snapdragon Conquest, our new gaming program. With Snapdragon Conquest, we are creating a community that challenges the competitive skills of gamers, allowing us a deeper understanding of the gaming needs of all our users in India."