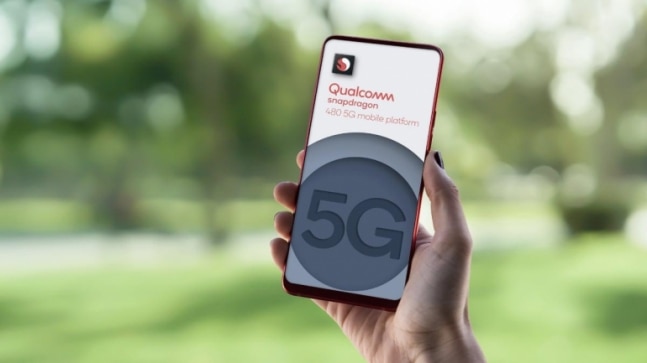 Recently, MediaTek surpassed Qualcomm to become the biggest chipset vendor for smartphones. The reason behind MediaTek's win is its bullish push into the 5G market with Dimensity chipsets that are available on a phone priced as low as about Rs 13,000. Qualcomm, on the other hand, has been focussing on the premium range, the smartphones in which do not sell as much. But Qualcomm is getting serious now. It has launched the first 5G chipset called Snapdragon 480 in the 4-series mobile platform that powers budget smartphones.

The new Qualcomm Snapdragon 480 chipset is integrated with the Snapdragon X51 5G Modem-RF system that supports both mmWave and sub-6GHz bandwidths. The mmWave is an advanced network channel for 5G connections available in a limited manner globally right now. But the sub-6GHz is common across 5G markets. The Snapdragon 480 also brings performance improvement over the last year's Snapdragon 460 processor. Based on the 8nm architecture as opposed to the 11nm in the predecessor, the Snapdragon 480 has eight Kryo 460 cores with a maximum frequency of 2GHz.

Qualcomm has said that the Snapdragon 480 processor comes with the Hexagon 686 digital signal processor (DSP) that brings a 70 per cent jump in AI performance over the Snapdragon 460 SoC. The new processor comes with the Adreno 619 GPU inside, which is said to bring twice the performance that the Adreno 610 GPU brings. Qualcomm has given the Qualcomm Sensing Hub inside the chipset to support AI algorithms with low power consumption. Qualcomm's new chipset also supports the Quick Charge 4 Plus technology, meaning the phones with this chipset will support reasonably fast charging methods.

Among other things that make the Snapdragon 480 SoC a significant upgrade over the last year's 4-series processor are the support for FHD+ displays with up to 120Hz refresh rate. This should mean that refresh rates on displays are going to become mainstream in the budget phone market. Qualcomm's Snapdragon 480 processor is also the first one to offer 64MP still images and a triple ISP for triple camera integration, meaning all three cameras can work at the same time to click three different photos. This is going to be phenomenal for the budget smartphone market. Notably, these features are what premium smartphones normally come with but Qualcomm's efforts towards different chipset markets will usher a new wave of highly capable budget smartphones.

The new Snapdragon 480 chipset is not going to be too long. It will start coming out in markets by Q1 2021. Brands such as Nokia, Oppo, Vivo, Xiaomi, and Motorola are among the companies that will launch their Snapdragon 480-powered smartphones soon.