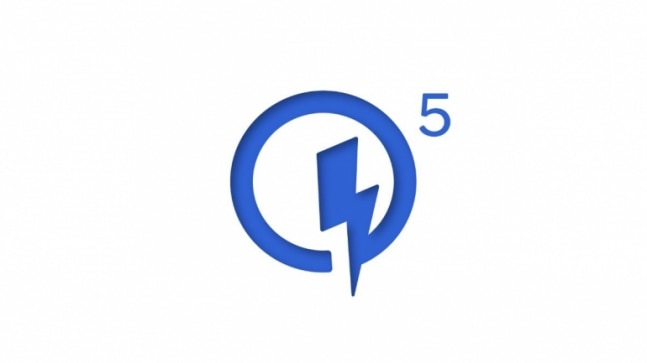 Qualcomm has introduced its next-generation fast charging technology, Quick Charge 5 only a few days after Oppo revolutionised the mobile battery charging with its 125W tech. Now, Qualcomm's Quick Charge 5 maxes out at 100W, which is significantly less than Oppo's 125W Flash Charge but it will become more mainstream on Snapdragon-powered smartphones than a company's proprietary solution. The US-based company is claiming its Quick Charge 5 can fill 50 per cent of a battery in less than five minutes while it will take only 15 minutes to top up the battery.

Qualcomm's Quick Charge 5 is using the Power Delivery Programmable Power Supply (PD-PPS) protocol, which is a part of the USB-PD standard for charging on USB-C port. This means any USB PD-PPS charger with the correct voltage and curent output will be able to provide the same charging speed as Quick Charge 5 on compatible devices. Furthermore, the Quick Charge 5 is based on the bi-cell battery system, wherein two batteries are connected via a wire in series, thereby increasing the charging voltage by twice as much. The increased high voltage increases the charging speed.

Qualcomm has said its Quick Charge 5 is now commercially available for OEMs. This should mean the technology can arrive in the market as early as Q3 2020.