Realme is going berserk with its launches in China and has announced an event for May 25. 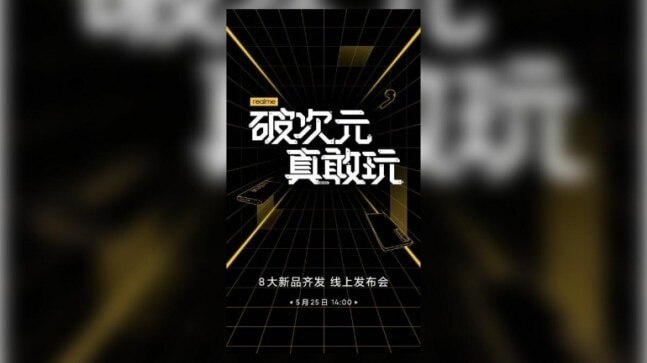 Realme is hosting an event on May 25 in China where it has confirmed to launch as many as eight products. The announcement of the upcoming major event comes after the company resumed its launch roadmap for various markets, inclusive of smartphones such as Narzo 10, Narzo 10A, and Realme X50m 5G. In an official teaser, Realme has confirmed there will be new smartphones, a new power bank, and possibly a new model of Realme Buds Air.

The teaser was shared by Realme on its Weibo account, mentioning the event will take place starting at 2 pm local time (11.30 am IST) on May 25. When translated from Mandarin to English, the teaser loosely read - " Breaking, is to dare to be different from others, really, to maintain the original intention of leapfrogging. At 14 o'clock on May 25th, 8 new products of the true self were released together" It also features the outline of some products, including a smartphone, a power bank, and a single truly wireless earbud.

While Realme has not confirmed what it is going to announce later this month, we have a fair idea of what we can expect from the event in terms of products. The much-anticipated Realme X3, Realme X3 SuperZoom, and Realme X50 Youth could be on the cards, besides another smartphone that has been spotted in the wild. It is codenamed "Blade Runner" and could pack a quad-rear camera setup. Realme could also launch the Realme Buds Air Neo at the launch event, which was recently certified in Taiwan. The information on the remaining devices that will see the light of day on May 25 remains unclear at this point, however.

Realme TV is also in the pipeline but the company confirmed it will launch in India before anywhere else. This means we may not see the Realme TV at the China launch.

The "Blade Runner" smartphone has been teased by Realme separately in a photograph. The smartphone can be seen sporting quad cameras on a glossy panel. It has a Realme logo emblazoned on the rear panel. The device is seen without a 3.5mm headphone jack at the bottom, which could mean the USB-C port will serve as the audio output port or the 3.5mm jack is on the top of the device. It also has a power button with an embedded fingerprint sensor, as seen via the photo. More information about the device is expected to arrive as the launch event nears.

ALSO READ | Google Meet is now available to all for free: Here is how to use it
ALSO READ | Samsung Galaxy Fold Lite in the works, tipped to be more affordable than Galaxy Z Flip, Moto Razr
ALSO READ | Honor X10 variants, pricing information leak ahead of May 20 launch
TweetYoutube
Tags: Realme