The Realme Book looks heavily inspired by the Apple MacBook but it is going to run Windows. 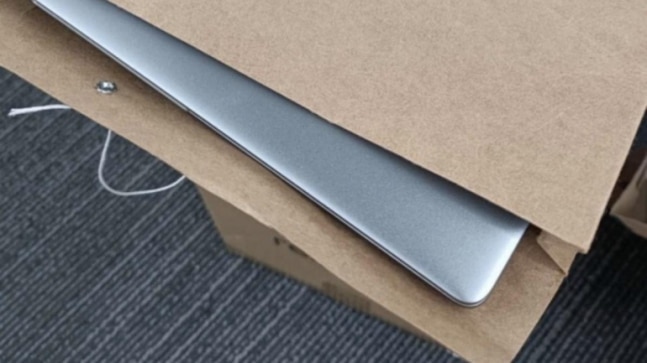 Realme's first laptop may be known as Realme Book.

Realme laptop made it out of the rumour mill earlier this week when the company's CEO for India and Europe, Madhav Sheth, confirmed it through a photo. The photo did only show a small portion, good enough to know that the laptop is for real, but it did not reveal the full look. A guess is the Realme laptop looks like the Apple MacBook. Now, a fresh round of leaks has surfaced, and they offer the best look at the Realme laptop yet -- and confirm the name Realme Book. That MacBook design is indeed coming on the Realme laptop, sort of.

Realme is calling its first-ever laptop Realme Book and its design looks very identical to that of MacBook Pro. The Realme Book has an aluminium body and thin bezels -- almost like the MacBook, so there is no chance you would want to give Realme the benefit of the doubt. The leaked images, obtained by Android Authority, show a tall footprint, which is interesting because most laptops have a horizontal-centric design. Per the report, the laptop screen follows the 3:2 aspect ratio, and this is what the company may highlight as a selling point. The underbody of the laptop has dual speaker grilles, which I think is the right place because the sound gets a surface for reflection and thereby amplification. There may also be USB-C ports on the Realme Book, including one for charging it, but the images do not show them, so we will have to wait for more information. Realme has dropped a subtle branding on the laptop's outer lid, and it is probably not a glowing one, like the Apple logo on older MacBook models. Realme will launch the Realme Book in different SKUs that will have different sets of features.

Sheth earlier this week tweeted out an image of Realme's upcoming product and asked his fans to guess what product category it is going to belong to. He even provided a cryptic code to help fans guess, but that was a stretch because the image clearly shows a small part of the laptop sticking out of a paper bag. If that seems random to you, you will be amazed to know that Steve Jobs pulled a MacBook Air out of a similar envelope back at its debut in 2008. Also, that cryptic code that Sheth shared translates to "Hello world!", and it is an introduction to the world of computer programming.

From what these leaked images show, the Realme Book is going to be a game-changer in the market, but success will depend on how much it is going to cost. Xiaomi, last year, brought its Mi Notebook laptops in India for around Rs 40,000, so there is definitely a bar that Realme has to breach to lure customers.

Apart from the laptop, Realme is also likely to launch its first tablet. Amid the discourse in the Realme community over what this tablet is going to be called after Realme's marketing chief Francis Wong conducted a poll, Android Authority got hold of a photo with the Realme Pad name. After the MacBook, the Realme Pad may be inspired by the Apple iPad, and offer high-end specifications, but we are not quite sure about them right now.

Realme is launching the GT 5G flagship phone on June 15 and that is where we are likely to hear more about the new products.