Realme India boss Madhav Sheth posted a video on Twitter to show off the upcoming earbuds with its ANC features. 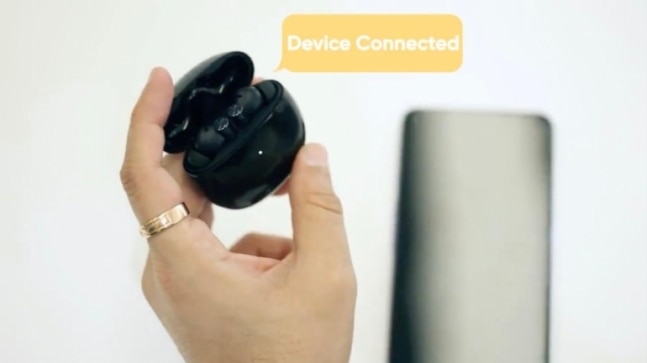 Realme is rumoured to be working on new earbuds this year. There are the Buds Q2 and the Buds Air 2 floating around mostly but there was new speculation on the third model when an image of the EDM duo The Chainsmokers working for Realme got leaked. Everything we know about these pairs of earbuds is in bits and pieces. Until now. Realme India boss Madhav Sheth has teased a new pair of TWS earbuds and these could possibly be the Buds Air 2.

In a video, Sheth showed off the new pair of earbuds in action. Sheth took the earbuds out of the charging case and wore them to listen to songs on Spotify. Then, he turned on active noise cancellation by tapping and holding on the right earbud. He, then, activated transparent mode that allows for surrounding sounds to enter your ears clearly. Sheth did not confirm the name of these earbuds but another instance hints these could be the Buds Air 2. The Realme Buds Air 2 can be seen in a jet black colour with a shiny finish -- in both the Sheth's video and the app screenshot. But more importantly, the earbuds look similar to the Buds Air Pro earbuds. The design includes a bulb-shaped pod with a long stem and silicone ear tips. A little tweak in the design would be this flat circle where the stem ends.

I found this design not very comfortable in my review last year. Despite being a good-looking pair of earbuds, the fit and heft of the earbuds was a matter of concern. But if Realme is continuing with the same design for its upcoming earbuds, I am not sure how well they will fit. And it is also likely the Buds Air 2 will come in more colours, at least in white colour, if not more. But active noise cancellation on the Buds Air Pro was good, which is why I am expecting Buds Air 2 to offer similar quality.

Realme was recently said to have partnered with the EDM duo The Chainsmokers for its upcoming truly wireless earbuds. Although there was no name associated with it, people believed there is a third model in the works. However, GSMArena cites a source saying there will not be a third pair of earbuds. Instead, the ones associated with Realme's partnership with The Chainsmokers are the Buds Air 2. This partnership will likely outline that there will be active noise cancellation on these earbuds, which Sheth can be seen showing off in the teaser video.

Airtel, Jio, Vi users with these devices can convert their physical SIMs into eSIMs, here is how