Realme C11 comes with a massive battery of 5000mAh capacity, touts two sensors at the back, and costs the lowest in Realme's latest hierarchy. 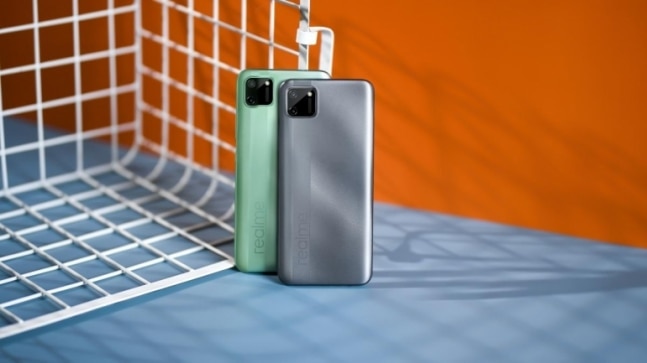 Realme C11 has been launched in India. The latest entry-level smartphone from Realme comes with a MediaTek Helio G35 processor and has a 5000mAh battery as the highlights. The smartphone also brings a new camera design on the back, taking a departure from the earlier models. The Realme C11 is not a successor to the Realme C3 but it has its own identity of being the most affordable offering by Realme in India.

The Realme C11 is priced at Rs 7,499 for the lonesome variant with 2GB of RAM and 32GB of storage. The smartphone comes in Rich Green and Rich Grey colours. Its sale starts at 12 pm on July 22 on Flipkart and realme.com. The offline sales of the Realme C11 are said to start soon.

the Realme C11 has Android 10-based Realme UI as the interface. It is powered by an octa-core MediaTek Helio G35 SoC, paired with 2GB of RAM and 32GB of internal storage, which is also expandable via a microSD card. There is a 6.5-inch HD+ (720x1600 pixels) display with a notch at the top. It has an aspect ratio of 20:9 and a screen-to-body ratio of 88.7 per cent. The smartphone does not have a fingerprint sensor on it.

For photography, the Realme C11 has two rear shooters, including a 13-megapixel main sensor and a 2-megapixel depth sensor. For selfies, there is a 5-megapixel camera on the front. The Realme C11 has Bluetooth, Wi-Fi, GPS, 4G VoLTE, and Micro-USB as some of the connectivity options. There is also a 3.5mm audio jack on the smartphone's bottom. The Realme C11 is backed by a 5000mAh battery that is rated to offer a standby time of about 40 days on a single charge, while the talk-time on it is 31.9 hours. The Realme C11 supports reverse charging, as well. The latest C-series smartphone measures 164.4x75.9x9.1mm and weighs in at 196 grams.