The Realme C11 is a strange name for the successor of the Realme C3, because it should traditionally be Realme C5. 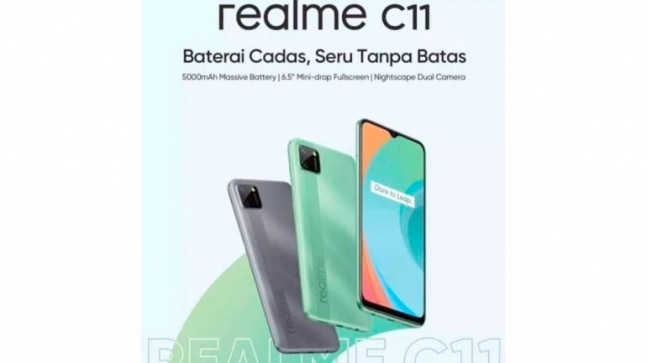 Realme C11 is supposedly the next device that will join the brand's C-series. It has been leaked earlier with some details, such as having a 5000mAh battery with 10W charging facility, in addition to bagging certificates in several countries. Realme has now announced it will launch the world's first smartphone with a MediaTek Helio G35 processor, which will debut on the Realme C11. Separately, a leaked poster of the Realme C11 has suggested its other specifications.

Realme Malaysia has posted on its Facebook page that it will launch the Helio G35 SoC on a smartphone soon. While the official confirmation does not divulge anything about the Realme C11, a press note sent to the Malaysian media has stated the upcoming Helio G35-powered smartphone will be the Realme C11. The note also has an image of what looks like the rear surface of the Realme C11, but, unfortunately, the camera module is slyly hidden with decorative leaves, so there is no way to tell how many cameras it will sport.

In addition, a leaked image of what is claimed to be an official poster of the Realme C11 has revealed a few more important details about the smartphone. Shared by a Twitter user with a username @i_am_myself7, the Realme C11 will have a camera module that resembles the one seen on the Google Pixel 4. It will come in two colours - green and grey - as per the poster shared by the tipster.

More specifications about the Realme C11 include a 6.5-inch Mini-Drop display, Nightscape dual cameras, and a 5000mAh battery. There will also be a 3.5mm headphone jack on the device, as well as a charging port that could either be a Micro-USB or USB-C. There does not seem to be a fingerprint sensor present on the smartphone's back, but when observed closely, the side-mounted power button looks to have embedded it.

Listed as the model number RMX2185 on China's CQC, the Realme C11 has been spotted to feature a 5000mAh battery with 10W fast charging support -- something the poster also confirms. The NBTC certification listing of the Realme C11 revealed there will be only 4G support on the device. Rest of the details still seem to be under the wraps, at least until Realme begins to tease the smartphone for launch.

Realme has not said anything on when Realme C11 will launch or if it will come to the Indian market. In any case, we will get to know more in the coming days.