The Realme C11 is also reported to come with a 5000mAh battery with 10W fast charging. 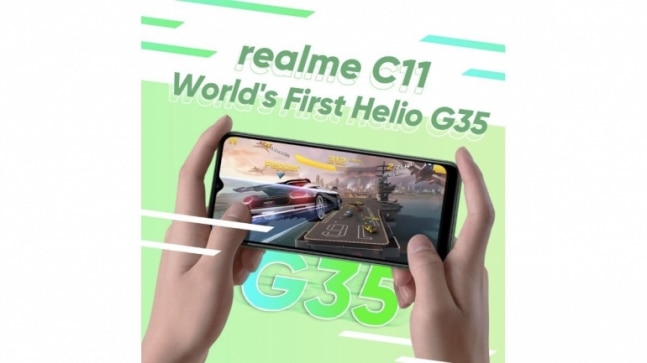 Realme C11 is set to launch on June 30 after its brief stay in the rumour mill. The next C-series smartphone from Realme will, however, launch in Malaysia and not India initially. The Realme Malaysia has been teasing the arrival of a new smartphone with MediaTek Helio G35 processor, which is confirmedly the C11. While the announcement does confirm when to expect the Helio G35-powered smartphone, it does not reveal any other details about the Realme C11. But we have bits of information on the smartphone's key specifications, thanks to the previous leaks.

The Realme C11 was spotted on multiple certification websites with the model number RMX2185, but only two of them suggested relevant information that the smartphone could have a 5000mAh battery with 10W fast charging and support for 4G networks. Later, a leaked poster of the Realme C11 claimed to offer its look, along with some other details, such as Android 10, a 6.5-inch MiniDrop display, and Nightscape dual cameras at the back. The Realme C11 is similar to the existing Realme smartphones design-wise.

Now, a fresh leak is coming from a Twitter user, who has claimed to provide even more information on Realme C11 ahead of its launch this month. According to him, the Realme C11 will have 2GB of RAM and 32GB of inbuilt storage, along with microSD card support. One of the two rear cameras will be a 13-megapixel shooter, said the tipster. Also, the fingerprint sensor is said to be absent on the Realme C11, however, going by the leaked poster the power button may have it integrated. Anyway, readers are advised to take this information with a pinch of salt.

The piece of information that is confirmed is that Realme C11 will house a MediaTek Helio G35 processor, marking the latter's debut on a smartphone. Realme Malaysia has shared that it is an octa-core processor that is built on the 12nm architecture, has Cortex A53 CPU cores, and is clocked at up to 2.3GHz. Another aspect that is likely true is that Realme C11 will come with a 5000mAh battery under the hood with some low-level fast charging technology.

The Realme C11 budget smartphone is set to be unveiled at 11 am MYT (8.30 am IST) on June 30. The launch will be live-streamed on Realme Malaysia's Facebook page.