Realme C15 will be launched in Indonesia later this month but its India availability is not confirmed as of now. 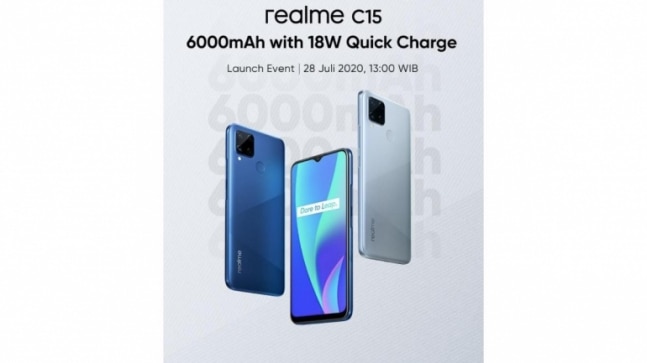 Realme has confirmed it will launch its first 6000mAh battery as Realme C15. After a bunch of leaks, the company is finally bringing the Realme C15 to the Indonesian market. The launch date for the Realme C15 has been set for July 28, which is close to the launch of the Realme C11. Realme Indonesia has shared a teaser image for the Realme C15 showing off the smartphone, its design, and colour options. For its specifications, only the battery and charging speeds have been officially revealed.

The major highlight of the Realme C15, its battery will have a 6000mAh capacity. This will be the first smartphone with such a huge capacity. More so, the smartphone will likely be meant for the sub-Rs 10,000 market. Realme has also revealed the C15 will have 18W fast charging, although it is not clear whether the bundled charger will have the capability.

The Realme C15 teaser shows the smartphone will have a design similar to the Realme C11, however, the patterns on the rear panel have been done away with. It is now a glossy panel with some slanted lines and colour gradients. The smartphone will likely come in silvery grey and purple colour options, although the name of these colour options are going to be fancy. On the back is the camera module, which is squarish and resembles that on the Realme C11. Realme has finally changed the phone camera design more than a dozen smartphones later.

Unlike the Realme C11, the Realme C15 will have four rear sensors, filling all the spots in the module. The LED flash sits right below the camera module towards the top left corner. At the centre of the back panel will be a fingerprint sensor. Notably, the Realme C11 does not have a fingerprint sensor. Instead, it has a face unlock system apart from the conventional unlocking methods. On the front will be a waterdrop-style notch on the display, the size of which is unknown.

Per previous rumours, the Realme C15 will be powered by a MediaTek chipset, the exact variant being unknown at the point. The smartphone is also said to come with 4GB of RAM, which should be enough for a budget device. Rest of the specifications are not clear at this point.

Realme C15 is launching in Indonesia on July 28 but it is expected to launch in Cambodia, Malaysia, and Thailand. The India availability details are not known but, going by the previous C-series launches, Realme C15 is likely here. But when it will launch is something only time will tell.