Realme has confirmed the Narzo 30 is in development and it wants your help in choosing the retail box design. 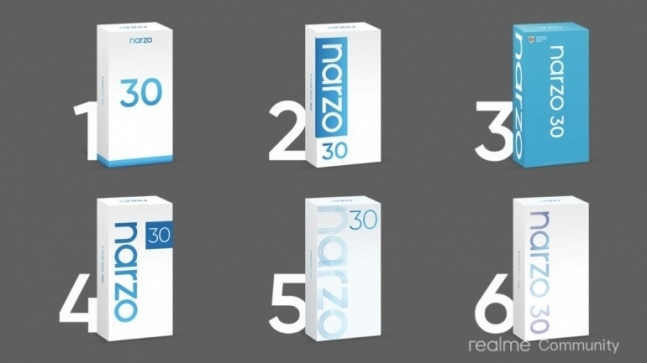 Realme Narzo 30 has just been confirmed by the company. Putting an end to all the speculation rife so far, Realme went ahead and revealed several different retail box designs for the Narzo 30. This post was shared on the community forum where Realme asked the members to vote for the best design. The Narzo 30 will be the successor to the Narzo 20, which was launched in India last year with budget specifications, including a big display and decent performance. So it is obvious to expect Narzo 30 to be better in terms of specifications.

The community members of Realme have six designs for the retail box of Narzo 30 and only one will be finalised. Realme is putting the onus of making the right selection on its community members. All the six designs of Narzo 30's retail box look appealing but interestingly, the colour combination for each is blue and white. Realme recently moved on from its all-yellow paint job for phone retail boxes, in its attempt to bring newness. For instance, the Realme X7 and X7 Pro come in black and grey coloured retail boxes. The Narzo 30 retail box design will highlight the "Feel the Power" slogan, the company noted in the forum post.

The polling activity for the retail box is nothing but a tactic that Realme is using to build the hype around the launch of the Narzo 30 smartphone. The X7 series launch is done and dusted and fans are now awaiting what is next from the company. If this polling is legit, Realme may as well introduce the Narzo 30 in March. Accompanying the Narzo 30 could be the Narzo 30A and the Narzo 30 Pro smartphones that will span in the budget price segment. For now the prices are not clear but you can expect the figures to be in the ballpark of what the Narzo 20 series cost.

The Narzo 20 has a 6.5-inch 720p LCD but without the 90Hz refresh rate. It is powered by an octa-core MediaTek Helio G85 processor clubbed with 4GB of RAM. The storage options are 64GB and 128GB but there is support for microSD card. It has the fingerprint sensor on the back. The Narzo 20 has a large 6000mAh battery, which was brought in by Realme on its C-series phones. It supports the regular 18W fast charging.

For cameras, you get three rear sensors on this one: a 48-megapixel primary one with f1.8 aperture, an 8-megapixel ultrawide angle one with FOV of 119 degrees and f2.3 aperture, and a 2-megapixel f2.4 aperture for macro photography. There is an 8-megapixel front-facing camera on the Narzo 20, as well, residing inside the waterdrop-style notch. The storage on the Narzo 20 is expandable up to 256GB and the smartphone runs Android 10-based Realme UI. The Android 11 upgrade is already available for the Realme Narzo 20.

ALSO READ | Realme X7 Pro is a good phone but do not buy it just for 5G
ALSO READ | Audio-chatting app Clubhouse blocked in China
ALSO READ | Nokia 5.4 is coming soon so let us talk about its possible price in India