Realme GT 5G flagship phone set for global launch on March 4, here is everything we know so far

Realme is going to launch its flagship phone GT 5G of 2021 next month and it is already getting ready for it. 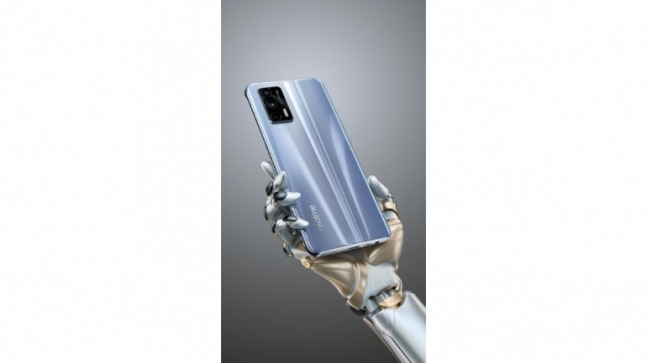 Realme's 2021 flagship, GT 5G, is getting launched on March 4. This is time, interestingly, the company is going for a global launch rather than making an initial announcement in China. The Mobile World Congress Shanghai is also kicking off on Tuesday and Realme is going to be showing off the new phone at the event, where it is likely to reveal some specifications and features of the GT 5G flagship at the tech exhibition, much ahead of the launch date. It seems the teasing part has already started. Realme released two posters for the GT 5G where it has confirmed two key aspects of the flagship phone, the camera specification and the design.

On Weibo, Realme shared a poster of Chinese actor and singer Yang Mi holding the GT 5G where its design is fairly visible. It is a glossy finish on the back that is painted grey. The camera module is rectangular in shape with three cameras stacked vertically. One of these sensors, the posters confirm, will be a 64MP one. Now it is not clear if it is a Sony sensor or a Samsung one, but chances are it is the former considering previous trends. Realme GT 5G is also confirmed to come with a 3.5mm headphone jack at the bottom, which is a good thing considering the recently launched X7 and X7 Pro phones have it removed. And there will be a USB-C port, as well.

This is all that the posters from Realme have confirmed. It is likely Realme will divulge more details about the GT 5G ahead of launch but for now, this is the official information. However, the rumour mill has a lot more to tell. The Realme GT 5G has been there for a while, along with all its certification processes. This phone is speculated to have the RMX2202 model number, which was recently certified by China's TENAA. It has also been found on the Bureau of Indian Standards (BIS) website, meaning the phone will be launched here soon. So, the certification website suggests there will be a 120Hz AMOLED screen, 12GB of RAM, 256GB of internal storage, Android 11-based Realme UI 2.0, and 65W fast charging on the phone. The phone is already confirmed to have the Snapdragon 888 chipset. These specifications make the GT 5G a lit bit more powerful, at least theoretically than last year's X50 Pro.

Rumours are also rife that there will be a Realme GT 5G Pro smartphone that the company may launch at a later date. This phone is said to come with a 160Hz AMOLED display, which is an insanely high refresh rate meant for high-end gaming phones. There will, of course, be the Qualcomm Snapdragon 888 chipset powering this phone. And finally, we may get to see the flagship 125W UltraDart fast charging technology on this phone that Realme launched last year.