Realme Narzo 10, Narzo 10A announced to launch on March 26

Realme India has announced that it will launch two new Narzo phones later this month. 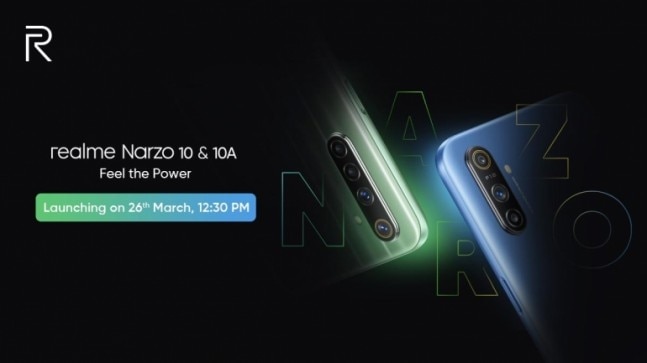 Realme Narzo was teased to be a new smartphone series earlier this week, but the specifics were not available then. On Friday, Realme India CEO Madhav Sheth announced the company will launch Realme Narzo 10 and Realme Narzo 10A as the first two smartphones under the series. The Realme Narzo series will be launched on Thursday, March 26 at 12.30 pm in India. It is highly likely that Realme will host this event online amid the increasing cases of Covid-19 in India to prevent a mass gathering at one place.

Realme Narzo was originally teased with a dance video that focused on millennials. It had a funky tune playing, referring to some product line meant for the young generation. Even the poster on the Realme website highlighted the word Gen Z.' However, later, Realme India announced that Narzo will be a smartphone series that will debut in India soon. Realme Narzo is a new smartphone series, much like the Pro, X, U, and C series, to take on the likes of Poco and Redmi. With first two smartphones -- Narzo 10 and Narzo 10A -- Realme will likely counter the Poco F1.

The announcement by Sheth also shows a glimpse of the two upcoming phones. And, by the looks of them, they look very similar to the Realme C3 and Realme 5i. One of the phones, likely the Narzo 10, will have a quad-rear camera setup while the other will sport three cameras on the rear, possibly the Narzo 10A. While one device is in blue colour, the other one has a green colour finish on the back. Both colours on Narzo series are reminiscent of Realme's phones launched to date. While the teaser does not tell anything about the specifications of the Realme Narzo series, there is a tip floating around the internet on what the phones could pack.

According to a leak by tipster Mukul Sharma, the Realme Narzo 10 and Narzo 10A will be powered by the MediaTek Helio G70 and G80 chipsets. The Helio G70 also powers the Realme C3 while the Helio G80 debuted on the Realme 6i in Myanmar. Helio G80 is likely to enter India with one of the two Narzo phones later this month. Moreover, Sharma has also tipped the pricing of the Narzo series. According to him, the series will start at around Rs 10,000 -- which makes the hierarchy of Realme phones really confusing. Sharma says the phones will fall in the following order -- C2/C3/Narzo/3/3i/5/5i/U1.

We are a few days away from the launch of the Realme Narzo series and the company will reveal more information in the coming days to create the hype.

Nokia 5310 XpressMusic is back in a new avatar