Realme Narzo 30 is the next device in the brand's launch pipeline. It is expected to come with an in-display fingerprint scanner, 5000mAh battery and a triple camera setup. Narzo 30 Pro launched back in February this year

Realme's sub-brand Narzo unveiled the Narzo 30 back in February last year. The series brought two devices, namely Narzo 30 Pro 5G and Narzo 30A. A fresh leak has appeared to reveal the specs and live pictures of a new device in the same lineup. This new smartphone, dubbed as Realme Narzo 30, has also been listed on Indonesia Telecom and US Federal Communications Commission (FCC) certification sites. This indicates that the smartphone is on the cusp of a launch.

Besides this, Narzo 30 launch was teased by Realme's Europe and India CEO, Madhav Seth, a couple of days ago. The smartphone is expected to arrive in both 4G and 5G variants.

Through a tipster, we know about the design and key specs of the Narzo 30, so let's talk about it in detail. 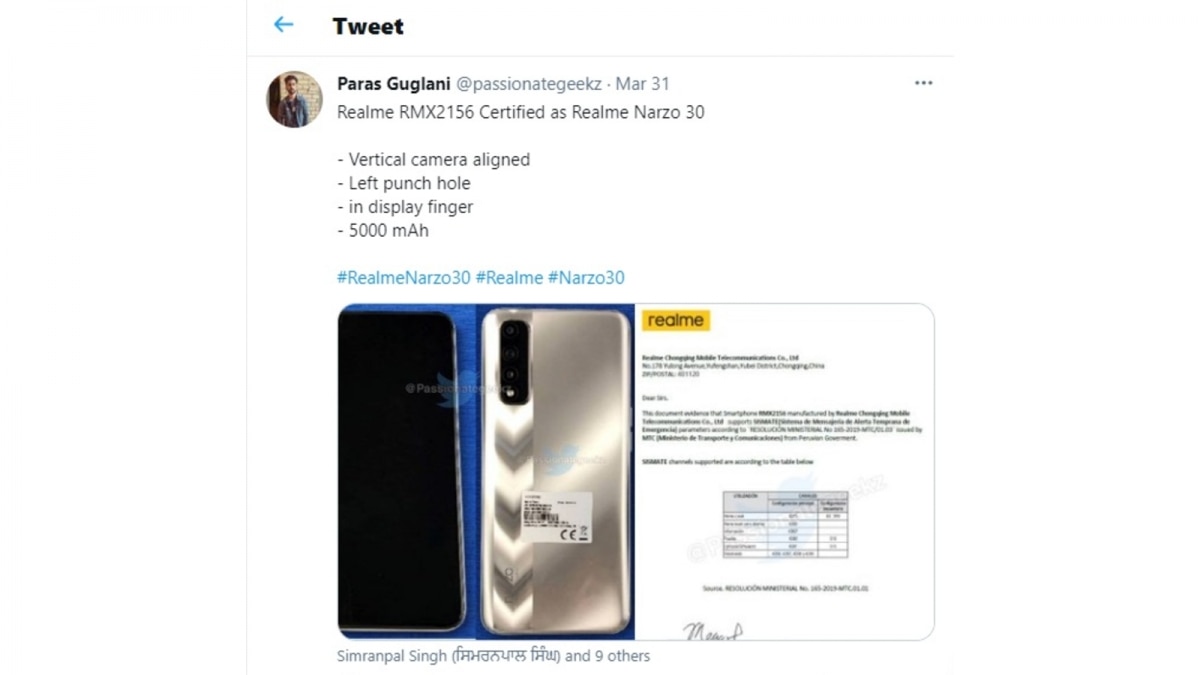 According to the tipster, the device bears an RMX2156 model number and is powered by 5000mAh. He further says that the Narzo 30 will get an In-display fingerprint scanner too.

The image revealed in the tweet by the same tipster showcases a smartphone dual-tone silver finish seen on a few Realme devices in the past. We can also see a pill-shaped camera module with triple cameras, and a flash stacked. Whereas on the front, the display appears to have a hole-punch camera on the top left of the display.

These details have further been confirmed by another credible tipster who spotted the Realme Narzo 30 on the Indonesian Telecom certification website. According to the listing, the phone packs a 5,000mAh battery and measures 162.35x75.46x9.45mm. It further says that the device will be powered by Realme UI 1.0 out of the box.

Finally, the Narzo 30 listing on the US FCC certification website informs that the device will ship Android 10 with Realme UI 1.0 on top. It will weigh 198 gms and have 30W fast charging support. The RMX2156 model number is presumed to belong to the 4G model. Realme is also expected to launch a 5G variant as well.

But Narzo 30 is not the only device in Realme's launch pipeline, and leaks suggest that Realme 8 5G is also coming soon. The device is tipped to be 8.5mm thick and 185gms heavy. Apart from this, the smartphone is expected to be powered by a 5000mAh battery and Realme UI 2.0.

iPhone user loses his life savings to fake Bitcoin app approved by Apple
Mobikwik user data has leaked, here is what happened and this is what you should do next
OnePlus' move up the ladder leaves space for Xiaomi and Vivo, but can they occupy it?