Realme Narzo 30 Pro is expected to be launched as the cheapest 5G phone in India. 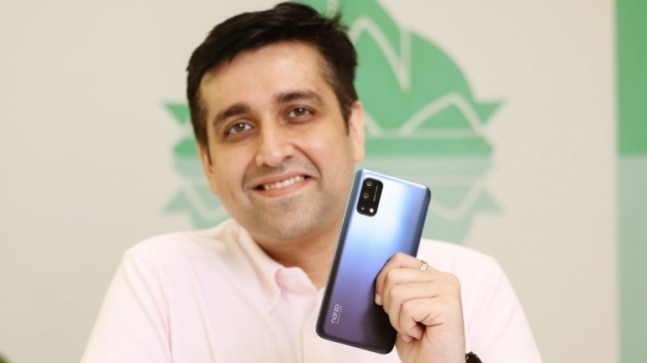 Realme Narzo 30 Pro, Narzo 30A, and the Buds Air 2 are set to launch in India on February 24. In the media invites sent Thursday morning, Realme said that the Narzo 30 series will "emerge as the democratiser for 5G" in India. This would mean the Narzo 30 Pro will be launched as the cheapest 5G phone in India. The announcement for the phone launch comes shortly after Realme winded up the launch of X7 series in India. Both X7 phones are 5G but both Narzo 30 series phones will not be. Only the Narzo 30 Pro is expected to bring 5G connectivity, while the Narzo 30A will be a 4G phone possibly for the budget-end customers.

Apart from the Narzo 30 series, Realme will introduce the Buds Air 2 truly wireless earbuds in India next week. The new earbuds will be the successor to the Buds Air, which was launched in 2019 as the company's first audio product. But the Buds Air 2 will bear resemblance with the Buds Air Pro of last year. There will be active noise cancellation on the Buds Air 2, according to the teasers by Realme India boss Madhav Sheth. The design of the Buds Air 2 is also somewhat identical to that of the Buds Air Pro. The rest of the features are not confirmed but they are going to be more or less the same as the Buds Air Pro's.

Realme will hold the digital event at 12.30 pm on Wednesday, February 24 to launch the three products. The price and availability details will be announced right then and there.

What to expect from Narzo 30 Pro and Buds Air 2

Just yesterday, Sheth confirmed one of the Narzo 30 series phones will have a MediaTek Dimensity 800U chipset, enabling 5G connectivity on it. This would make the Narzo 30 Pro the cheapest 5G phone in India. Other specifications include a 120Hz Ultra Smooth Display, which was leaked in a poster. The display could be an LCD because Narzo 30 Pro is supposed to be a cheaper phone than X7 that uses an AMOLED without high refresh rate. So to balance it out, the Realme Narzo 30 Pro could go for a high refresh rate at the expense of an AMOLED panel. A TENAA listing for the Realme Narzo 30 Pro suggested a 6.5-inch display, a 4880mAh battery with 65W fast charging technology, Android 11-based Realme UI 2.0 out of the box, and the dimensions of 162.5x74.8x8.8mm. Talking about the Buds Air 2, Sheth has already confirmed there will be active noise cancellation on these earbuds. This feature will allow both transparent and noise-cancelling modes, much like how they are available on the Buds Air Pro. Some screenshots of the Realme Link app where Buds Air 2 earbuds seem to be supported early show various sound modes and gesture control on the earbuds, all of which is pretty basic for a pair of earbuds. Right now, I am not sure if there is any extra feature available on these earbuds.