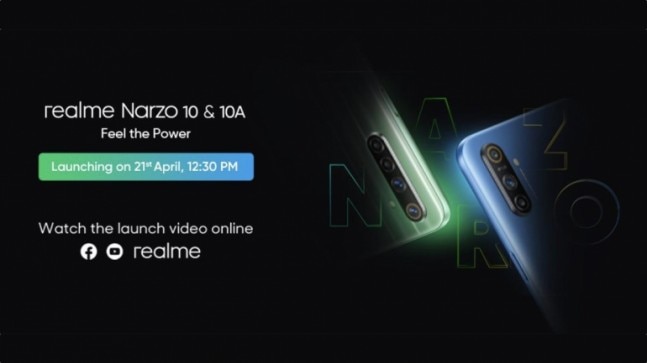 Realme on Friday announced that it will launch the Narzo smartphone series on Tuesday, April 21. The Narzo series was previously scheduled to debut in India on March 26 but since the nationwide lockdown was imposed, Realme had to cancel the online event. The April 21 event for the launch of Narzo series will again be a digital one, wherein Realme will play a pre-recorded video. The Realme Narzo series will have two smartphones - the Narzo 10 and the Narzo 10A - both of which are speculated to be positioned in the mid-range and budget price segments, respectively.

The Realme Narzo 10 and Narzo 10A smartphones, as we said, will be launched on April 21 at 12:30 pm. It will be live streamed on YouTube, Facebook, and Realme website for those who do not want to miss any updates. Realme Narzo 10 series price will also be announced at the launch.

The Realme Narzo series has been tipped to start around Rs 10,000 in India. The Narzo 10A will be a budget smartphone that could have a Rs 10,000 price tag while the Narzo 10 will be placed higher, somewhere around Rs 13,000 - Rs 14,000. According to previous rumours, the Realme Narzo series will sit between Realme C3 and Realme 3 series, price wise. In any case, more details will be revealed in the coming days.

If these rumours hold water, then the specifications of the Realme Narzo 10 and Narzo 10A should be similar to those of the Realme 6i and Realme C3, respectively. The Realme Narzo 10 and Narzo 10A will be powered by the MediaTek Helio G70 and G80 chipsets, according to earlier rumours. The Helio G70 also powers the Realme C3 while the Helio G80 debuted on the Realme 6i in Myanmar. Realme could reveal more specifications in the build-up to the launch event.

ALSO READ | Apple Magic Keyboard to arrive in India soon, price starts at Rs 27,900
ALSO READ | Amazon, Flipkart and other e-commerce websites allowed to deliver non-essential items from April 20
ALSO READ | Indian govt advisory says avoid using Zoom: Why and what to do if you HAVE to use Zoom
TweetYoutube
Tags: Realme