Realme has posted a photo of a Nissan GT-R car model that straightaway confirms the Race will be called GT.

Realme Race flagship is coming soon. But this is not what it is going to be known as at its launch. The first guess for the name of Realme's 2021 flagship was X60 Pro, logically because last year's flagship was called X50 Pro. But then, there was a tip suggesting this phone may be called Realme GT and now it seems this might be true. Realme's Xu Qi Chase has teased the Race phone with a photo of a Nissan GT-R scale model. This is a strong hint at the Realme GT moniker.

In a post on Weibo, Chase confirmed that Realme Race is "coming soon". This is not new because the company has been making such announcements for a while without revealing the launch date. But what is interesting is the photo of a Nissan GT-R racing car that accompanies Chase's post. And this very thing is the hint that GT moniker is indeed coming through. I am not sure how Realme will justify what GT stands for and what it will be doing in its smartphone lineup, but it is a short name that is easy to remember. 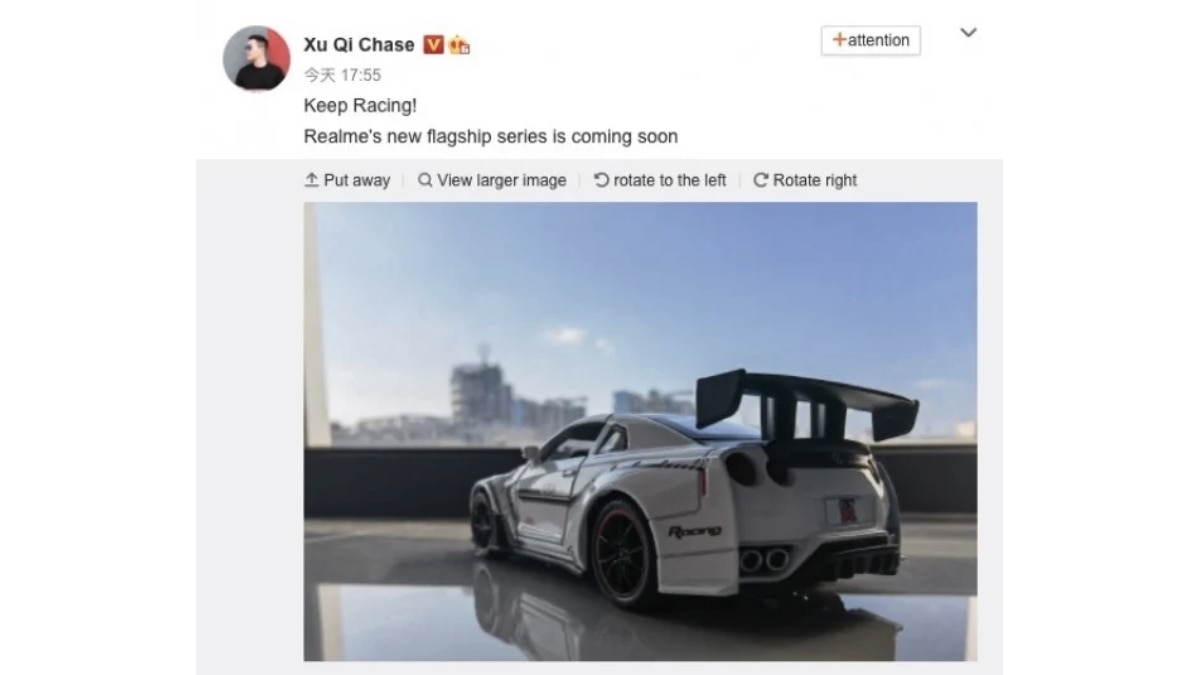 And this is not the first time we are hearing GT with regards to the Realme Race flagship device. Previously, a tipster spotted a trademark listing for GT that Realme had filed in India. It was said that this trademark is for the next line of phones, the first of which will be Realme Race flagship. Then, a Realme device with the GT branding on the back showed up on China's TENAA certification website. The point is we have enough evidence that does not make us not to believe Realme GT exists.

For all we know so far, Realme Race aka GT will be a Snapdragon 888-powered phone. This very attribute puts it in the flagship category but some of the other specifications are also in line with the label. There is expected to be a flat 6.5-inch Super AMOLED display with 120Hz refresh rate, up to 12GB of RAM and 256GB of internal storage, a 5000mAh battery with the leading 125W UltraDart fast charging technology, Android 11-based Realme UI 2.0, and a triple camera setup comprising a 64MP main sensor, a 13MP telephoto sensor, and a 13MP ultrawide sensor, stacked in a vertical design. Some of the renders that leaked previously showed this design is going to be similar to what Realme X7 phone has.

Realme GT is going to be an important phone for the company as it looks to take on Samsung Galaxy S21, Mi 11, and later the OnePlus 9 in the flagship Android phone category with the help of aggressive pricing. But how good this phone will be is something only time will tell.

Motorola Moto E7 Power to launch in India on February 19: Here is everything we know so far