Realme could be working on a new series of camera-focused smartphones, which could include the unannounced X3 Pro. 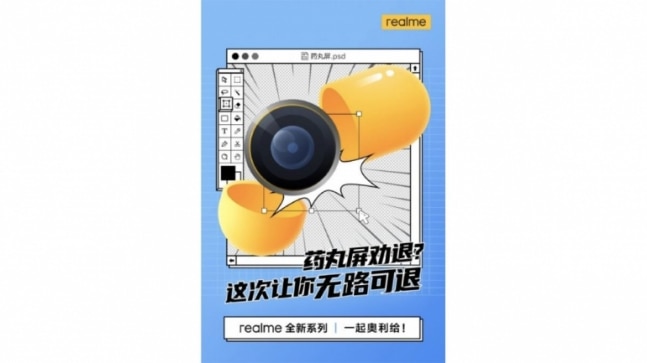 Realme has teased a new smartphone series in China. The Oppo-offshoot has shared a poster of what shows cameras as the main selling point for the upcoming series on Weibo. Realme has not mentioned the name or additional details about the smartphone series but the announcement comes at the ideal timing. Realme has confirmed it is attending the IFA 2020 in Berlin for the first time, and it might be the right time to announce products. However, the series could be launched in China initially.

The Weibo post shows a camera module popping out of a yellow pill, showing the next smartphone series will likely be camera-centric. There is an Adobe Photoshop interface outlined in the background, as well, in the poster. A part of the caption reads "Realme brand new series" when translated from Chinese to English, suggesting the company is now set to introduce a new segment of smartphones. For now, the upcoming series looks exclusive for the Chinese market but Realme could make an announcement on the same at the IFA event in Berlin.

Realme already has various smartphone line-ups but the ones that focus on cameras are the top-end devices, including the recently launched Realme X3 SuperZoom. Realme is also expected to launch the Realme X3 Pro at IFA, but that smartphone will belong to the X3 series, which already has X3 and X3 SuperZoom and, hence, is not new. Realme could introduce a new mid-range segment, somewhere between Rs 20,000 and Rs 30,000, because that is where its offerings are scarce.

Another guess would be Realme launching the Realme X3 Pro under a different name and a different series. So far only reports have said Realme has the X3 Pro left to launch but the company has not confirmed it yet. Moreover, the Realme X3 Pro will likely make the X3 SuperZoom less relevant if it launches with only so much difference in their prices. In any case, Realme will divulge more details on what it is planning to launch and how the events will unfold.

Separately, Realme is preparing to launch the Realme C15 in Indonesia as its first 6000mAh battery phone. The company will introduce the smartphone on July 28, along with 18W fast charging and possibly a MediaTek processor.