Realme has not said anything on when it will bring this speaker to India. 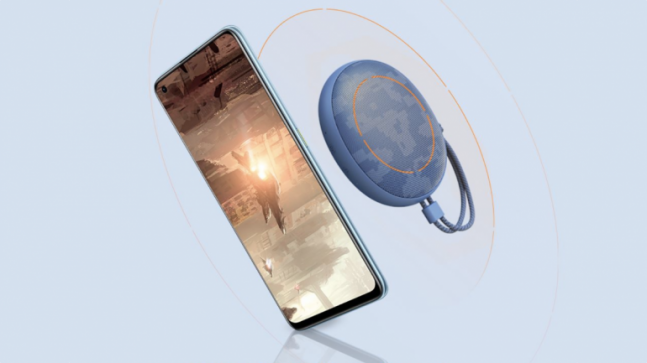 Realme will launch its first portable speaker at an upcoming event. The company has confirmed a mega launch event for Malaysia where it will introduce new products. One of them will be a Bluetooth-enabled speaker that Realme confirmed to launch last year as one of the Tech Life products. Among other products will be Realme Watch 2, Buds Q2, and Buds Air Neo 2. The event is centred around IoT products, which is why it is unlikely Realme will launch a phone then.

The Realme launch event will take place on April 30 in Malaysia. Realme has not said anything about any events in other markets, so maybe it is going to be a debut for most Realme products. Realme has already revealed what it will launch and the list includes the Realme Watch S Master Edition, Realme Watch 2, Realme Buds Q2, Realme Buds Air Neo 2, Realme Motion Activated Nightlight, Realme Alkaline Battery, and finally, the Realme Cobble Bluetooth Speaker.

While most of the products in this list are successors of previously launched ones or just new to the Malaysian market, Realme's portable speaker and alkaline batteries are brand-new. The portable speaker has a blue camo style with a matching colour on the underside. There is also a lanyard for holding or hanging the speaker, increasing portability. Realme has not said anything about the specifications of this speaker yet, but it is expected the speaker will rival the Mi Portable Bluetooth Speaker that sells for Rs 2,499 in India. The batteries will be of AA and AAA sizes and called Z15 and Z17.

Realme is also introducing the second generation of Watch and Buds Q at the upcoming event. While a lot is not known in terms of specifications, the new models are expected to have better connectivity and battery life than what the first-generation products have. The Realme Buds Q2, especially, is teased to come with a total playback time of 20 hours and support 88mm Super Low Latency mode for gaming. The Buds Q2 will come in a black colour option, much like the first-generation Buds Q, but there may be more colour variants. Realme launched the Buds Q TWS earbuds for Rs 1,999 last year.

There is no word on when Realme will introduce the new products, especially the Bluetooth speaker, in India, but the launch seems imminent now that there is an official announcement about it.