Realme to launch Realme Band on March 5, smartwatch also in the works

Realme had recently launched the Realme X50 Pro 5G and announced that it will launch the Realme Band on March 5. 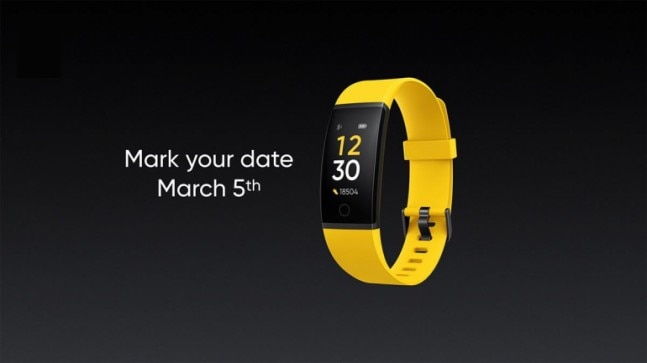 Realme Band will be launched in India next month.

At its Realme X50 Pro 5G launch event, Realme detailed its roadmap for the release of IoT and lifestyle products that would help the brand reach a far bigger base and expand into other product categories. One of these products is Realme Band, which was announced back in December last year but its launch has been delayed so far. Realme India CEO Madhav Sheth has finally revealed the Realme Band will debut in India on March 5. Another product that will join the Realme family is a smartwatch, the first glimpse of which has been released as well.

Sheth took to Twitter to announce the launch date for the Realme Band. He wrote: "Have seen many of you spotting and asking me about the #realmeBand on my wrist. The wait will be over on 5th March guys." Accompanying the tweet is an image of what looks like the retail box for the Realme Band. A slight glimpse of the fitness band is also visible on whatever portion of the top side of the box is visible. But another tweet from Sheth shows the Realme Band in its full glory.

Apart from the above-mentioned pieces of information on the Realme Band, the details such as the specifications and pricing of the fitness band are not available. We will have to wait for Sheth to share more details in the coming days, as per what he traditionally does ahead of launches.

Similarly, Realme also has a brand new smartwatch up its sleeve - something that the brand said it has been working on for quite some time now. Among other AIoT products that will see their launch in the near future, the Realme smartwatch has been teased for the first time via a tweet by Sheth. The video teaser tweeted by Sheth shows the smartwatch in action, sporting a circular display with a raised design and carrying two physical buttons on the right side. Not many details are available at this point.