Realme recently launched as many as six new products in Malaysia and now it is adding four more. 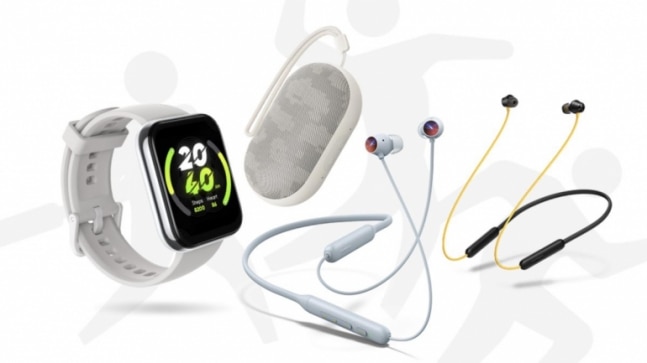 Realme launch event will take place on May 20.

Realme is expanding its smart devices ecosystem with at least four new products. The company has announced it will launch the Realme Watch 2 Pro, Buds Wireless 2, Buds Wireless 2 Neo, and Pocket Bluetooth Speaker on May 20. But this launch event is not happening in India. Realme is bringing the new products to the Malaysian market first, much like the last time when Realme launched as many as six IoT products. The most interesting product here is the Realme Watch 2 Pro, which is supposed to be the successor of the Realme Watch 2 and comes just about a month later.

In India, Realme postponed its big launch event scheduled for May 4 to a later date due to the worsening Covid-19 crisis. For now, there is no launch date for whatever Realme has in store for customers in India. Possibly, the products that Realme Malaysia has already launched and is going to launch may be a part of the announcement in India. Realme had previously mentioned that it will expand its AIoT portfolio in India this year.

Realme has teased some features and details of the four products that will debut later this week. For instance, the Realme Watch 2 Pro will have a square display, a silicone strap with a buckle, and GPS connectivity for accurate location. There may also be an Always-On Display on the smartwatch. The Watch 2 Pro will be the successor to the Watch 2 and some of the specifications justify that. Moreover, according to a GSMArena report, there is an FCC listing for a Realme Watch, which may be the Watch 2 Pro, and in that case, it would have a 390mAh battery inside. The battery life, however, is something the company will announce on May 20.

Apart from that, the Realme Pocket Bluetooth Speaker will have a small design that will allow you to keep the speaker inside your pocket. It has a capsule-like design with mesh on one side. There is also a lanyard to hang the speaker or just carry it in your hands. Then, you have the Buds Wireless 2 and Buds Wireless 2 Neo, which look like trimmed down versions of the Buds Wireless Pro. Both of them have a neckband design, much like the prequels, along with physical buttons to control media playback and volume. The earbuds in them are likely to have magnets for easy management and, also, power on and off.

Realme Malaysia has scheduled the event to begin at 12 pm local time, which translates to 9.30 am IST. The live stream will be on Facebook.