Realme X7 series will support 5G connectivity likely in the mid-range segment, something that will pose a competition to the OnePlus Nord. 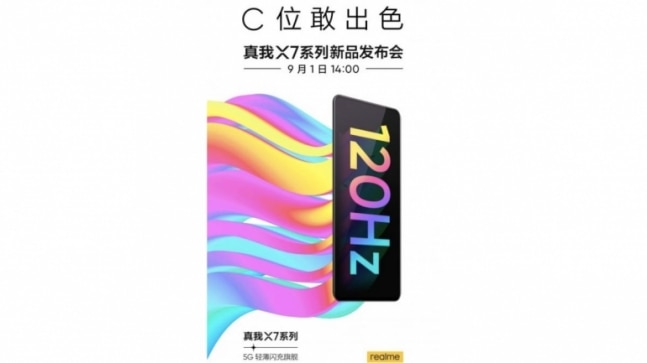 Realme X7 series will launch on September 1. The Oppo offshoot is bringing the new series to the Chinese market with two smartphones, the vanilla Realme X7 and a Realme X7 Pro that will have everything spruced up a little bit. The features on the X7 series will include support for 5G networks and a 120Hz refresh rate on the AMOLED display. The announcement is about the X7 Pro mainly, but the marquee X7 is likely to have those features too.

In a Weibo post, Realme said it will hold an event at 2 pm local time in China to announce the X7 series. In India, you can catch the real-time updates from the launch event starting at 11.30 am the same day.

The Realme X7 series will be a big leap from the existing X3 smartphones. The company recently launched the X3 and X3 SuperZoom while the X3 Pro could soon be launched in select markets at the upcoming IFA in Berlin. The Realme X7 series is coming with a prominent 120Hz display and 5G support on all models, which could be a part of the company's efforts to bring 5G smartphones across all price categories. Realme recently launched the V5 5G in China for under Rs 20,000.

Realme could use the recently-launched MediaTek Dimensity chipsets for 5G on the Realme X7 and X7 Pro, since its V5 5G rocks a Dimensity 720 processor.

The poster that Realme has shared on Weibo translates to "flexible AMOLED screen" to English from Chinese. But these words do not necessarily mean a flexible display on the X7 and X7 Pro smartphones. What they could imply is that the X7-series smartphones could have dual-curved display -- something that will be a first on Realme smartphones.

The smartphones could be a big deal for Realme, especially when they are taking forward from the X3 series. Moreover, 5G connectivity is something that every brand wants to offer across price categories, thanks to the availability of several tiers of chipsets from Qualcomm and MediaTek. It could counter OnePlus Nord, which is currently the only phone with 5G support in under Rs 30,000 in India.

Realme's X7 series could also feature fast charging support, the most advanced 125W one, if I may. The fast charging technology came out a few weeks back as a breakthrough in the smartphone industry. Previously, the company was rumoured to launch the 125W Flash Charge feature on the alleged X3 Pro smartphone.

Zoom for Home to be available on smart displays