The Realme TV will be launched on May 25 alongside the Realme Watch. 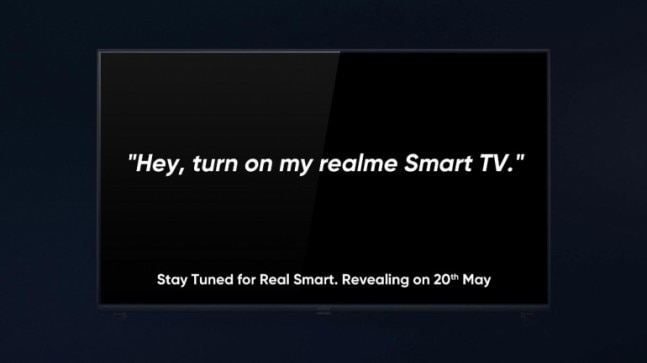 Realme TV is set to launch in India on May 25 alongside the Realme Watch. While there has been ample information available on the Realme TV, it was only last week when it began getting officially teased. Realme has now put up a dedicated microsite for the Realme TV wherein it has detailed nearly all the specifications and features of the upcoming television. As expected, the Realme TV will be powered by a MediaTek processor, in addition to featuring Dolby Audio tuned speakers. Realme has also said that more information will be revealed on May 25 i.e., the launch day of the Realme TV.

According to the Realme website, the Realme TV will come with a "first in segment" 64-bit MediaTek processor. The quad-core processor will have an ARM Cortex-A53 CPU and a Mali-470 MP3 GPU under the hood. Moreover, the Realme TV will have a bezel-less design, which we have seen on several previous TV models from other brands such as TCL, Xiaomi, and Kodak in the affordable segment. Realme is touting "Chroma Boost Picture Engine" on the Realme TV with up to 400 nits of brightness. Realme says its upcoming TV will offer 20 per cent more brightness than the average in the price segment.

Realme is also packing the Realme TV with 24W stereo speakers that are four in number. Going by the image of the Realme TV emanating sound, there will likely be two speakers on each side. The speakers will be tuned by Dolby Audio, which will be again "first-in-segment" as per Realme. The claim that these features will be "first-in-segment" entirely depends on the pricing of the Realme TV, which we guess is likely to be lower than that of most televisions available in the affordable price category. Realme is also claiming the Realme TV will be "Real Smart", which alludes to the presence of Google Assistant. The microsite mentions "Hey, turn on my realme Smart TV" as well.

Previously, the Realme TV was spotted on the Android TV certification website as well. The Realme TV is expected to come running Android 9 Pie-based Android TV software, which could mean users will be able to download popular apps from Google Play Store. A previous report also suggested the Realme TV will be preloaded with the Netflix app. There is also a Bluetooth-enabled remote control expected to be bundled with the Realme TV, much like the one available with the Mi TV.

Airtel announces Work@Home plans for businesses: Everything you need to know

Samsung Galaxy A11 and Galaxy A41 price announced: Here is how much they will cost