Realme has announced that its next smartphone series on August 3 in China. Realme V5 will be the first smartphone under the series. 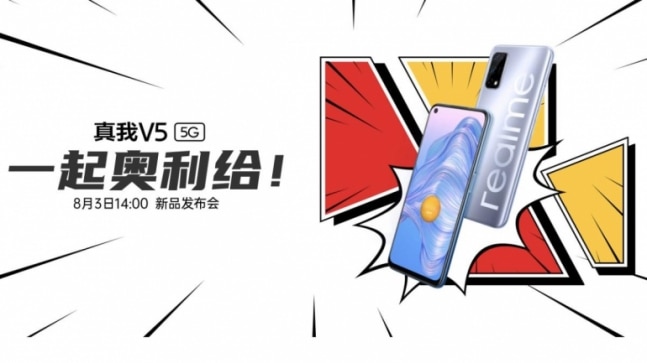 Realme V5 is set to launch on August 3. After some teasers that have revealed the quad-camera setup and some other key specifications, Realme V5 will go official in the Chinese market initially. With Realme V5, the company is also going for another new camera design after it did the same with the Realme C11. The smartphone will be the first one under the new V-series.

In a Weibo post, Realme announced it is bringing the V5 to China on August 3. The company also shared a series of teasers for the V5 showing the device in its entirety. The fresh teasers reiterate an L-shaped quad-camera setup at the back, which looks like the ones seen on Samsung Galaxy M-series smartphones. There is a fingerprint sensor on the power button of the smartphone and a punch-hole setup on the display. There is also a big Realme branding on the rear panel, much like what we saw on the Narzo 10A.

The teasers, however, do not divulge the information on what the Realme V5 will pack inside. But thanks to the TENAA listing of the Realme V5, we already know there will be a 48-megapixel main sensor on the back accompanied by an 8-megapixel ultrawide sensor and two 2-megapixel sensors for macro and portrait photography. On the front, the Realme V5 is said to come with a 16-megapixel camera for selfies. The smartphone is also confirmed to be a 5G smartphone, which means there could either be a Snapdragon or a Dimensity chipset under the hood.

For now, it is not clear whether the Realme V5 will make it to other markets or not, given it features 5G support and there are only a few countries that support 5G currently, India not being one of them. Maybe Realme will launch the V5 in India, just like how it launched the X50 Pro 5G, even though 5G seems far-fetched right now.

This Russian hacker is likely behind ransomware attack on Garmin