The Realme Watch could debut this year alongside other Realme's AIoT products. 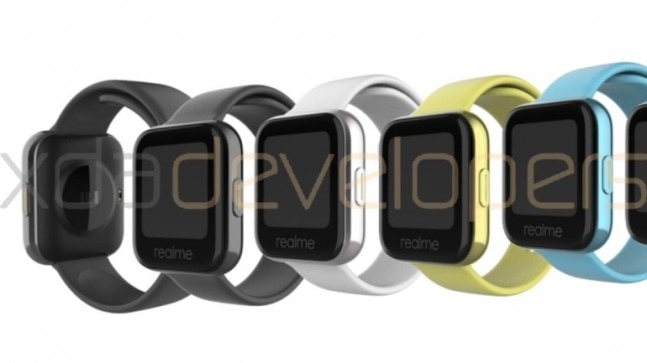 Realme has a slew of products in the pipeline but the coronavirus-induced lockdown has put most activities on hold. One of the products is Realme's smartwatch, a name for which has not been given yet but it could likely be called Realme Watch. The smartwatch has been confirmed to debut in India first -- it was even spotted in a company's Q&A video but that was a bare glimpse. Its specifics have remained a mystery so far. In what could be termed the biggest leak on Realme Watch to date, some key specifications and design of the upcoming smartwatch have emerged.

Folks at XDA Developers have claimed to have gained access "to a lot of information" about the Realme Watch. This includes the renders of the Realme Watch, its various functions, and screenshots of how the interface on it would look. The Realme Watch will have a squarish dial with silicone straps that look like those on the Apple Watch. The report has doubted the straps are unlikely to be interchangeable. The display on the Realme Watch has thick bezels, with the bottom chin flaunting the Realme logo. There is a single physical button on the right edge, which can be programmed for various functionalities.

Moreover, the Realme Watch will come with a 1.4-inch TFT LCD display with a resolution of 320x320 pixels, as per the report. It will pack a 160mAh battery under the hood with a life of 7 days on real-time heart rate monitoring. There will be IP68 dust and water resistance on the Realme Watch as well. The report claims Realme Watch will not run on Wear OS, instead, it will be preloaded with a custom OS made by the company.

Realme's smartwatch will support Bluetooth v5.0 without native GPS. There will be limited storage on the Realme Watch and it will be able to store data only for seven days before it starts deleting older data "on a rolling basis". Music playback is also supported on the Realme Watch, along with an option to use the smartwatch as a Bluetooth-enabled shutter for the paired phone camera.

There will be five watch faces preloaded on the Realme Watch, the report has added. But there should be an option to download more through the companion app. The availability for third-party watch faces is not known at the point. There will also be a Find My Phone tool to locate the paired phone.

Since the smartwatch will be focused on the Indian market, Hindi will be available as an optional language for the interface, in addition to English. The report, however, does not mention if the smartwatch will support other Indic languages, as well.