Realme X3 Pro may have been leaked in an image along with display specifications. 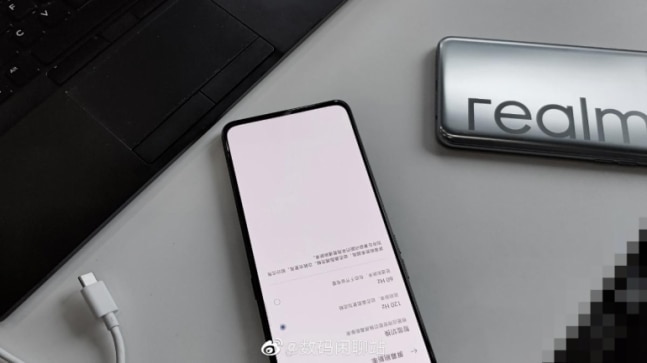 Realme is seemingly working on a slew of 5G smartphones, many of which have leaked via certification website TENAA in China. While none of them has a commercial name yet, the model numbers are available - RMX2176, RMX2200/RMX2201, and RMX2121. Except for the last one, the specifications of the first three models are also abundantly available, thanks to the listings. A fresh tip now claims to offer the first live image and specifications of the RMX2121 model, which is believed to be the flagship Realme X3 Pro.

A China-based tipster has shared the information on Weibo (via Gizmochina) about the impending Realme X3 Pro device. He has shared a live image of a Realme device that he claims is the X3 Pro. It can be seen having the stout mast for Realme branding at the back - the kind we first saw on Realme V5 renders but they turned out to be unrelated to the smartphone later. The display of the smartphone is not properly visible so there is no telling to whether there is a punch-hole or a notch on it.

The TENAA listing of the RMX2121 is yet to be populated with specification details, much like the other models. The RMX2176 and RMX220 have been listed on the certification website with nearly all their details and both of them are hinted to be 5G smartphones. The former, according to the listing, could run a MediaTek Dimensity 720 processor while the latter will rock a Snapdragon 765G processor under the hood. There will also be other major differences between their camera and display specifications, the RMX2121 will have a 13-megapixel main sensor while the RMX2200 is listed to house a 64-megapixel main sensor.

The stark difference in the specifications clearly implies the two smartphones do not target the same price category. We will know more about these smartphones in the coming days.